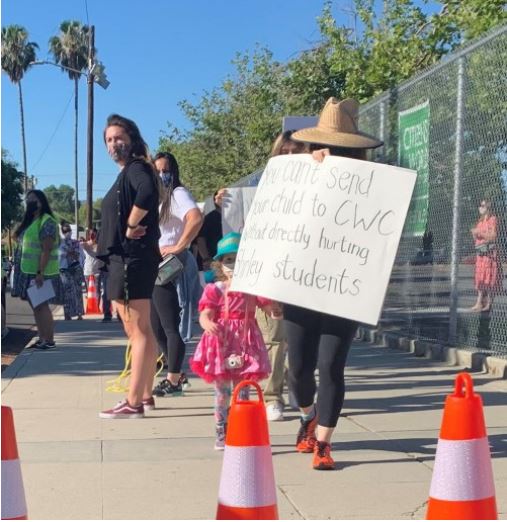 The father that held the megaphone has a son who requires the services of a speech therapist. In prior school years, these services were provided in a dedicated space where there were no outside distractions. However, after Citizens of the World (COTW) charter schools used PROP-39 to take space on the Shirley Avenue Elementary School campus, this specialized space has now become one of their classrooms. Because a teacher without a roster was not using the room, it was considered "empty" by this deeply flawed law.

Using his turn to speak up, the father pleaded with the administrators of COTW to answer for their actions. Was the damage done to his son an acceptable cost so that they could expand their network of publicly financed private schools? Now that the charter school had taken over the speech therapy room, where was his son supposed to receive these services? Why was COTW lying to their parents by telling them that this room was empty and unused before they took it over? 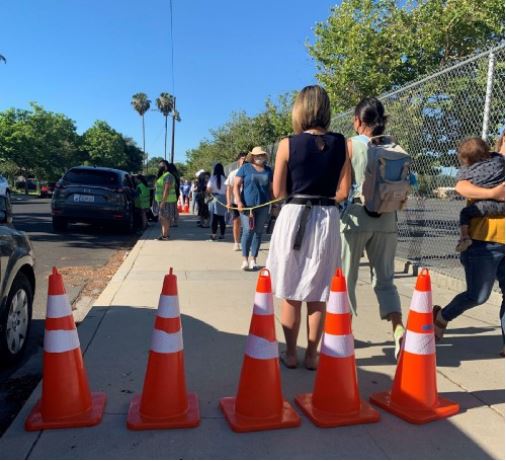 (Image by Carl J. Petersen)   Details   DMCA
This father was not the only parent with questions for the administrators at COTW. As the charter school held its last week of classes for the school year, parents, students, teachers, and other community members from Shirley Avenue Elementary School gathered to make their voices heard during morning dropoff. It was a loud but peaceful protest with leaders making sure that students of the charter school were never blocked from entering, even accidentally. In contrast, the charter school blockaded the public sidewalk in an attempt to disrupt the protest. The supposed defunding of the Los Angeles School Police Department did not stop them from having three patrol cars and at least one unmarked car on scene throughout the three days of protests. None of them did anything to stop the school from physically blocking the protesters. 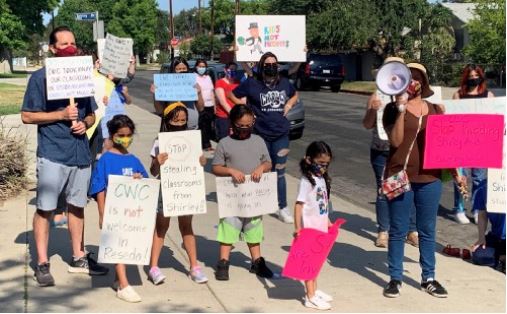 (Image by Carl J. Petersen)   Details   DMCA
One of the questions asked by the community was when this nationwide chain of charter schools was going to pay its past due bills to the LAUSD for almost $1 million. COTW incurred this debt by over-estimating the number of students who would enroll in their schools, sometimes using nefarious methods in their calculations. Since this resulted in an over-allocation of space provided to them under PROP-39, they were subjected to a state-mandated penalty. When charters do pay these penalties, the vast majority of the funds are distributed directly to affected schools, like Shirley, that were harmed by having space taken from them that the charter school did not need. COTW's inability (or refusal) to pay these bills is, therefore, a direct theft of funds from Los Angeles students.

Given the charter school's consistent inability to fill the space it already has, community members also wanted to know why COTW requested even more space on the Shirley campus next year. Having already seen disruptions to the special education program, robotics lab, and music classes, they wondered how much more functional space on the public school campus would be sacrificed to create empty space for the charter school.

LASPD officer coordinates with COTW to serve a restraining order
(Image by Carl J. Petersen)   Details   DMCA
Not unsurprisingly the administration of COTW refused to meet with the parents, students, teachers, and other Shirley community members. Over the course of three days, the only direct contact happened when COTW administrators, with the assistance of the LASPD, served one of the protest leaders with a restraining order forcing him to leave the area. Apparently, the ability to peaceably assemble is not a value of world citizenship. The colonized should know their place and accept their invaders without complaint."