"Alec! Now we can get married!" -Steve Martin
"Ok. But if you play that effing banjo after eleven o'clock...." -Alec Baldwin

The Last Tradition : (blog):  I'm on the losing side here. So I have nothing to celebrate other than to promise there's going to be a heavy price paid by this decision. New York, you've earned the wrath that is to come! 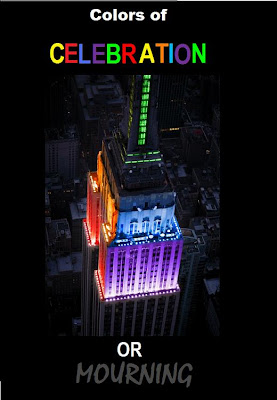 New Yorkers are still giddy and so are other parts of the nation (note the collage below), but not everyone was celebrating New York's historic vote: there were too many people who were outraged and tearful about it and would not be consoled. They felt betrayed as well, and have now focused on seeking revenge:

"Enormous political coercion has resulted in a profound failure of moral courage in the New York Senate. A clear majority of the people of New York oppose counterfeit 'marriage,' but Gov. Cuomo and anti-family lawmakers have shown that their allegiance is to a small but vocal minority seeking to redefine marriage and family.

"The so-called religious protections that were tacked on to the bill will ultimately do nothing to protect the religious rights of New York citizens. As we go forward there is little doubt that the "incentives," some taxpayer funded, used to sway votes, especially Republican ones, will be exposed.

In an op-ed Sunday in the New York Daily News, Nicholas DiMarzio, bishop of Brooklyn, called on members of his diocese to "not to bestow or accept honors, nor to extend a platform of any kind to any state elected official, in all our parishes and churches for the foreseeable future," a statement that may signal a new era in church-state relations in the Empire State.

The lopsided coverage of the event by the media also highlighted the feelings of the Right: world news agencies (like Al Jazeera) made the event prominent because New York has been an international leader for the last 75 years. MSNBC and CNN gave the vote over an hour each of coverage.

Fox News dedicated all of 2 minutes.

Pat Robertson (of course) likened our country to Sodom and Gamorrah and Michele Bachmann dodged the issue by saying that she supports the state's right to pass such legislation, while not stating that she thinks its an immoral piece of legislation. Archbishop Dolan pulled an Eddie Long when he compared the gay rights movement to Goliath:

It's very discouraging because the opposition is very well oiled, very well financed. They have all the elites behind them, whether it be the TV talk shows or radio or newspaper columnists. It's a real David and Goliath battle.

Bryan Fischer, Pat Buchanan, Gary Bauer, Rod Parsley, and numerous Republican Presidential hopefuls have not chimed in as yet - but they will. They will be compelled to. This is certainly an "in-your-face" moment for everyone in the religio-political sphere and if certain people don't vehemently oppose the New York vote, they can kiss their careers goodbye. For all Dolan's talk of the gay rights movement being a well-oiled, well-financed machine, the reaction from the Right will come in the form of rhetoric (lots of it) and cash (ditto).

The Right may prove yet that victory can double the ferocity of the vanquished and that New York was a battle but not the war. The progressive populace of the country will still be facing Southern Baptist churches and Texas school boards. It will be facing Republicans who slash budgets without conscience and Tea Party activists fronting for a possibly sinister agenda. The progressive populace will excoriated and reviled more than ever, because force is absolutely necessary. And we haven't seen the end of "righteous assassinations."

MOURNING FOR THE FUTURE

As I sit here writing about same-sex marriage, New York and the response of the Ring Wing's Christianity, I'm stressed out because of another perspective: I'm apprehensive. It doesn't help that while I'm writing this, the man for whom I'm a caregiver is off getting a blood transfusion as part of his "comfort care." He knows he's dying, but he doesn't fear death. In fact, he's more fearful for the people he's leaving behind. In a sense, he's in mourning for their future: he feels helpless when faced with politicians who want to rape the earth, rape our livelihoods, rape our souls for the betterment of a Christo-corporate America. Neither of us saw any of it coming: we thought that love and compassion would come through. We thought that fairness and reason would prevail, especially in a nation firmly entrenched in separation of church and state. We both now share the same kind of disillusionment, but because of his condition, he chooses not to dwell on it too much.

Rev. Dan Vojir is has been writing/blogging on religion and politics for the better part of ten years. A former radio talk show host (Strictly Books " Talk America Radio Network) and book publisher, Dan has connected with some of the most (more...)
Related Topic(s): American Family Association; Bryan Fischer; Compassion; Gay Lesbian Rights; Marriage Equality; Media New York Times; New York; Same-sex Marriage; Tony Perkins, Add Tags
Add to My Group(s)
Go To Commenting
The views expressed herein are the sole responsibility of the author and do not necessarily reflect those of this website or its editors.