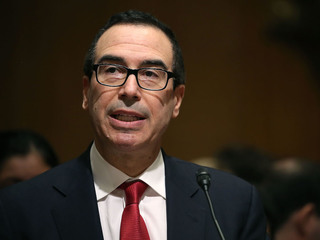 There are plenty of signs that Steve Mnuchin is not a good guy, even by the lax standards of today's banking industry. OneWest, a bank he established with partners and ran from 2009 to 2015, mounted a record of ruthless foreclosures (in one case over a 27-cent error). A memo from top prosecutors in California's state attorney general's office saw evidence of its "widespread misconduct" and repeated violations of law, according to The Intercept. Mnuchin misled the Senate (accidentally, he says) on his banking history, his personal finances and his role in running a Cayman Islands tax-haven account.

Nevertheless, Senate Republicans will almost certainly succeed at their goal of confirming Mnuchin as the next Treasury Secretary as soon as possible.

Republican senators like Rob Portman of Indiana used contorted logic in an attempt to convince voters that Mnuchin did not mislead them. Mnuchin attributed his failure to list $100 million of his own assets in his disclosure forms to "oversight." (If you're rich enough to overlook $100 million, it's safe to say you're obscenely rich.)

Mnuchin will soon run a department that once reprimanded him and OneWest, requiring them to work with an independent monitor. Yet his areas of responsibility will include "supervising national banks and thrift institutions" and "enforcing Federal finance and tax laws."

"It Takes One to Catch One"

Aggressive bankers have held high office before, and it hasn't always ended badly. Joseph P. Kennedy Sr. had a reputation for playing rough and cutting corners, at a time when banks were largely unregulated and unsupervised. Kennedy was also said to have smuggled moonshine during Prohibition, but no evidence of that has ever come to light. (Kennedy, like Mnuchin, invested heavily in show business and did well.)

When Franklin D. Roosevelt appointed Kennedy to serve the first chairman of the Securities and Exchange Commission (SEC), FDR was reportedly asked why he had appointed such a crook. "Takes one to catch one," Roosevelt is said to have replied. By all accounts, Kennedy did an excellent job.

But there was a major difference between Joe Kennedy's outlook and Steve Mnuchin's. Kennedy understood that Wall Streeters were rascals who needed strict oversight. Mnuchin wants to go easy on them.

Mnuchin wants to loosen regulations on the bankers whose misbehavior and massive fraud cost the economy trillions of dollars in lost income in the 2008 financial crisis. He used the same phrase to describe both the Dodd-Frank law, which took some needed first steps toward reining in predatory bankers, and the "Volcker rule" limiting banks' ability to gamble with federally insured deposits. "Way too complicated," he complained.

To paraphrase what Sen. Lloyd Bentsen told Dan Quayle when he faced him in a vice presidential debate: Steve Mnuchin, you're no Joe Kennedy.

During his confirmation hearing, Mnuchin said he now supported the Volcker rule, although he said it needed to be "improved" in ways he did not describe. He also said he supported some version of a "21st century Glass-Steagall Act" to separate commercial banking from the speculative and often high-risk world of investment banking. But again, Mnuchin offered no specifics.

Mnuchin is part of a wave of former Goldman Sachs bankers joining the Trump administration just a few short months after a campaign in which Trump vilified Goldman Sachs as representing the worst aspects of American finance.

Assuming that his confirmation proceeds as expected, Mnuchin and Trump -- together with Mnuchin's ex-Goldman Sachs colleagues -- will work with a Republican-led House and Senate that shares a basic antipathy to banking regulation and has increasingly diverted Wall Street campaign contributions from the Democrats.

Related Topic(s): Bankers; Kennedy-Joseph; Steve Mnuchin, Add Tags
Add to My Group(s)
Go To Commenting
The views expressed herein are the sole responsibility of the author and do not necessarily reflect those of this website or its editors.