Source: The BRAD BLOG
And the "truthiness" contained in new state auditor's report on those flawed systems won't help... 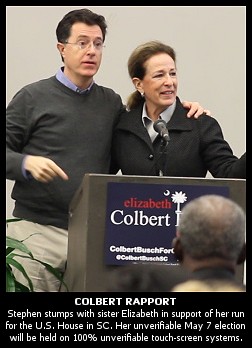 The candidate announced as the "winner" of that election, based on those unverifiable voting systems, will either be the one who received the most votes from SC voters in the 1st Congressional District -- or the one who didn't. There will never be any way for anybody to know for sure one way or the other.

For that matter, after Sanford faces off with Curtis Bostic in Tuesday's Republican primary run-off election for the nomination, neither candidate will be able to know for certain whether they've actually won or lost that election either. This is South Carolina "democracy" in 2013 (and in at least one third of the country elsewhere.)

To make matters still worse, the state's Legislative Audit Council (LAC) has just released a new official report on those failed voting systems. Unfortunately, the report includes a enormous flaw which, when I pointed it out to Perry K. Simpson, Director of the LAC on Friday, his response was: "I see your point"...

Brad Friedman publishes Bradblog.com
Related Topic(s): Elizabeth Colbert Busch; Mark Sanford; Voting Integrity; Voting Machines, Add Tags
Add to My Group(s)
Go To Commenting
The views expressed herein are the sole responsibility of the author and do not necessarily reflect those of this website or its editors.