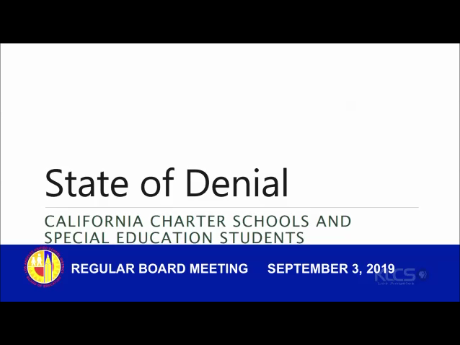 (Image by KLCS)   Details   DMCA
-mce-style="text-align: center;">"These large special education enrollment differences raise serious questions about whether some charters are unlawfully either steering such children away, failing to identify students in need of special education, or pushing enrolled students with disabilities out, perhaps through harsh discipline or other means. "

When it comes to illegally discouraging the enrollment of children with severe special education needs from their publicly funded private schools, charters have a lot of tools available in their toolboxes. Some will use enrollment processes to signal to parents that these children are being screened out or they will force these students into undesirable programs. Others will stress that all of their students are expected to be college-bound or use draconian discipline policies against students who are unable to follow the rules. More blatant is the "counseling out" of students by directly telling parents that their children will do better at another school.

The "Education Reform" movement that birthed these charter schools places a high value on data and, therefore, summarily dismissed anecdotal evidence of these violations. As an example, when the California Charter School Association was asked to comment on allegations that Granada Hills Charter High School was engaging in this type of exclusionary behavior, they did not inquire if these allegations were true. Instead, they asked the school for "a quick response on why this isn't something worth writing about". As long as standardized test scores are high enough, the makeup of the student body is ignored.

In a step towards backing up these allegations against the charter school industry, United Teachers Los Angeles (UTLA) has released a report entitled "STATE OF DENIAL: CALIFORNIA CHARTER SCHOOLS AND SPECIAL EDUCATION STUDENTS ." Moving beyond anecdotes, this report analyzed the enrollment data from three of the largest school districts in California: Los Angeles, Oakland, and San Diego. As expected, public schools enrolled a larger percentage of students with disabilities (14.27%) than their charter school counterparts (11.01%). The difference was even more pronounced when comparing "students with the most severe and typically most financially costly disabilities ". Children with moderate to severe disabilities comprised 28.85% of LAUSD's special education population but only 15.18% of those enrolled in charter schools. This resulted in $74.65 million in cost savings for the charter school industry in Los Angeles alone. The charter school industry simply passed these costs on to every student enrolled in LAUSD schools in order to increase their own profit margins.

Last Tuesday, UTLA presented this report to the LAUSD School Board. While it was referred to Scott Schmerelson's Special Education Committee for a more in-depth discussion, Board Member Monica Garcia took two opportunities to live up to the name of the report. Instead of addressing these discrepancies, Garcia tried to divert attention from the problem.

The first line of Garcia's attack was to "connect financial investments with outcomes. " She then went on a tangent to bring in the red-herring of magnet programs where she said the "population of service is 6%. " This ignores the fact that magnet schools are included in the overall data of LAUSD Schools. Unlike charter schools that reduce their costs by not serving students with special needs, the district maintains the same cost no matter which of their schools educates these children.

Garcia then went back to clarify her original point, saying that she did not only want to see "just enrollment data, [but] achievement data " as well. While a successful program for those with severe needs will focus on helping students reach their full potential, Garcia wanted to focus on how children were reaching academic goals. "Our labor presentations are what they are and people can say whatever they want, but as a Board Member, I'm not interested in a particular strategy. I'm interested in helping more children that I represent to get to graduation as soon as possible ." Apparently, she does not represent those who will never get the chance to graduate.

Almost five hours into the marathon board meeting, I finally received my chance to speak. Garcia had already left, but I still took the opportunity to address her comments before moving on to the subject at hand:

Before I go into my prepared comments on this, I am kind of fuming over some of the things that happened earlier.

UTLA brought up a problem with charter schools and special education and Monica Garcia immediately wanted to divert attention from that. She wants to look at all kids as having the ability to read and write and there are kids out there who can not read, write and sometimes even speak. So when she discounts these children...

Yeah, I'm fuming over that.

And it is important to note that when charter schools do not take their fair share of kids with special education needs they hurt every child in the LAUSD.