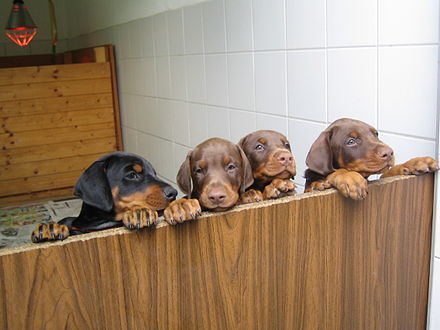 The above photo is not about the subject of this article; here is a photo of Lou before he died; I would have used this as a headline here, but it is not yet available through Commons Search:

(Please don't read this story if you have too soft a heart or are not thick-skinned enough to handle extreme animal cruelty, or if you don't believe that defenseless animals deserve as much justice as humans do.

I pray that the judge in this case absolutely nails this miscreant with the absolute maximum sentence, and then that he suffers five times what this dog in Ohio suffered before dying a horrible and ENTIRELY AVOIDABLE death. If you witness animal cruelty, speak up to authorities immediately; don't wait till it is too late, as it was in this case; if you want to communicate the prosecutor in this case, his phone numbers and address are at the end of this article.)

Sweet Lou, the Doberman, has died in Butler County, Ohio, from starvation with complications of blastomycosis, a fungal disease in the lungs. He was so hungry that he ate rocks, the Xrays showed.

"He lived his life on too short a chain and was deprived food for quite some time, and he got to the point where he was willing to eat anything that he could get his mouth on," the Humane Society post stated. His ideal weight should have been about 75 pounds. He came in at 51.9 pounds, but he'd gained about six pounds in the first few days he received care. He took a turn for the worse with breathing troubles in the last few days, dealing with a recently confirmed fungal infection called Blastomycosis.

"That is a fungal infection that dogs can pick up in the environment, and if not treated can be deadly. Lou was severely infected with this disease, and despite us doing everything medically possible, he passed away late last night after going into respiratory distress. His body was just too weak to fight the disease," Bowser said.He was 2 years old, and was brought to the Animal Friends Humane Society Monday, April 22, with open sores in and on his skeletal frame.

Named Lucifer by his owner and renamed "Lou" by his new friends, he received five days of love and medical care before he succumbed to his condition late Friday, April 26.

Related Topic(s): Animal Cruelty; Animal Welfare; Sweet Lou The Doberman Who Was Starved To Death In, Add Tags
Add to My Group(s)
Go To Commenting
The views expressed herein are the sole responsibility of the author and do not necessarily reflect those of this website or its editors.