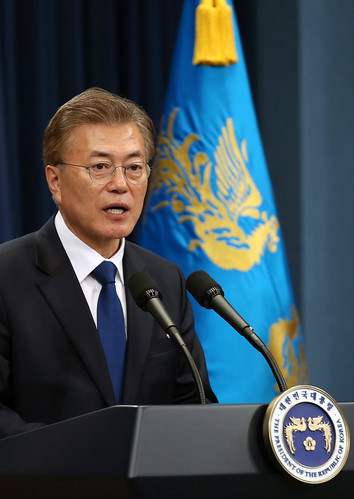 President Moon Jae-in is talking with North Korea's Kim Jong-un and America's not amused
(Image by KOREA.NET - Official page of the Republic of Korea)   Details   DMCA

The mainstream US media, when it comes to the idea of talks between the governments of North and South Korea, are focused on the idea that North Korean leader Kim Jong-un is trying to drive a wedge between the Republic of Korea and the United States. No doubt that is true, but this focus misses a major part of the story.

Nobody should be surprised that Moon, who was swept into power thanks to a surge of voters (he won by 41.1% against two conservative parties which received 24% and 21.1%) last year on a promise to reach out to North Korea and attempt to bring the two warring halves of the Korean Peninsula (they are still technically in a state of war that began in 1950, nearly 68 years ago) back together.

Taking the seeming baby step that he has taken of inviting North Korea to compete in the Winter Olympics being held next month in South Korea might seem like a small thing, but it was actually a bold step for Moon. What most Americans don't know is that South Korea is technically a kind of colony of the US, given that its military is still under the control of the United States. This is thanks to a UN Security Resolution passed in 1950 authorizing a UN military action against the North and designating the US as the lead authority of the UN operation -- a controlling role that the US still clings to.

That situation explains the bizzare warning given about North/South two-party-only negotiations by former Obama-era US State Department Assistant Secretary for East Asian and Pacific Affairs David R. Russell, who is quoted in a Jan. 3, 2018 article in the New York Times by Mark Landler as revealingly saying, "It is fine for the South Koreans to take the lead, but if they don't have the US behind them, they won't get far with North Korea"And if the South Koreans are viewed as running off the leash [my emphasis], it will exacerbate tensions within the alliance."

Imagine US diplomats telling NATO allies UK, Germany or France not to "run off the leash" in bilateral discussions say, with Russia! Sure, they too are on a leash to some extent, but nobody associated with the US State Department, would ever stick it in their faces like that.

Leo Chang Soon, a Korean-American historian and author of an important history of US and Korea, whose father faced an assassination threat for standing up, as vice president, to Korean dictator Rhee, says, "South Korea has been under the US leash since Syngman Rhee flew into Korea on General Douglas MacArthur's plane to become the first president of South Korea (ROK) on September 2, 1945."

Related Topic(s): Korea; Korean Unification; North Korea; North Korea And South Korea Talks; South Korea, Add Tags
Add to My Group(s)
Go To Commenting
The views expressed herein are the sole responsibility of the author and do not necessarily reflect those of this website or its editors.