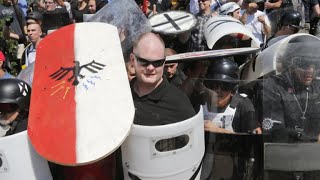 In Durham, North Carolina, militants of a small Left party destroyed a statue of a Confederate soldier. Takiya Thompson, a member of the Workers World Party, climbed the statue and helped pull it down. She, along with seven other activists, was arrested by the police. Just before her arrest, Thompson said of her action: "I chose to do that because I am tired of living in fear. I am tired of white supremacy keeping its foot on my neck and the neck of people who look like me."

Hundreds of people marched to the Durham County Courthouse asking to be arrested for the destruction of the statue. This was a largely symbolic gesture. Serena Sebring, who did not go to the initial protest when the statue was torn down, was among the throng who came to be arrested. "All of us are willing to share the cost of our freedom," Serena Sebring said. She is the regional organizer for Southerners on New Ground, an anti-racist organisation based in Atlanta (Georgia). "All of us are here, and we are willing to take whatever responsibility, whatever consequences come along with the removal of that statue."

Between 1861 and 1865, a brutal civil war threatened to tear the United States apart. The main fault line was the attitude of the different states in the U.S. towards slavery. The southern States -- the Confederacy -- were rooted in a plantation economy that relied upon slave labor. The Confederacy was defeated by the armies of the north, which were driven partly by anti-slavery sentiments but also by the interests of industrial elites against those of the agrarian elites of the south. Slavery was substantially ended with the defeat of the Confederacy, although nostalgia amongst southern whites for the plantation era remained powerful.

The statue of the Confederate soldier in Durham was not erected in the immediate aftermath of the war. It dates from 1924, during a period of struggle by African American and other minorities to attain civil rights. The bronze statue was part of a wave of such monuments that were installed in prominent parts of southern cities. When Thompson and others pulled at the statue, it fell and bent at its base with great ease -- those statues were cheaply produced in 1924 to be erected hastily across the country as a mark of the resilience of White Power over Civil Rights.

The conflict in Durham followed that in Charlottesville (Virginia), three hours' drive north. Not far from the campus of the University of Virginia, which was founded by Thomas Jefferson, the third President of the U.S., sits what was known as Lee Park. The park is dominated by a 26-foot-high (eight-metre) statue of Robert E. Lee, the leader of the Confederacy, on a horse. The statue, like the one at Durham, was not erected right after the Civil War, but in 1924. That year, Charlottesville hosted the conventions of the Confederate Veterans and Sons of Confederate Veterans. Local dignitaries, including the entire higher administration of the University of Virginia, joined the ceremony to instal the statue. Judge R.T.W. Duke, a member of the Sons of the Confederacy and a former Circuit Judge, was the master of ceremonies. He called Lee "the greatest man who ever lived." From the nearby Shenandoah Valley came President Henry Lewis Smith of Washington and Lee University, named for Robert E. Lee who went there to head the college after his defeat in the Civil War. Smith called Lee a "Christian saint" at the 1924 installation.

Over the past century, small towns and cities across States in the southern U.S. have had to reconsider the monumental legacy of the Confederacy. Serious attempts to remove statues and to rename streets have been scuttled by the old power brokers. The statues in question were not always of Confederate generals or soldiers of the "lost cause" but also horrendous ones such as that of "Uncle Jack the Good Darky" (1927) in Natchitoches (Louisiana). This statue depicts an African-American man who deferentially tips his hat to passers-by. A fight over its presence led it to be donated to the Rural Life Museum, where it greets visitors.

These are not fringe issues. The Confederate flag flew on official buildings after the Civil War -- and remains aloft in many places. Fights in South Carolina to remove the flag seized the political imagination and tore the already divided population along race lines. As recently as 2015, the establishment of the American Right fought against the removal of the flag of the Confederacy from public buildings.

William Kristol, editor of Weekly Standard, a right-wing magazine, bemoaned the "Left's 21st century agenda to expunge every trace of respect, recognition or acknowledgment of Americans who fought for the Confederacy." Stoking the idea of "respect" for the pro-slavery wing of the Civil War is one way that the American Right has appealed to white voters. It suggests that the Confederacy and its history of pro-slavery is integral to the heritage of whites in the U.S.

After the murder of Trayvon Martin by the police in Missouri in 2012, Charlottesville city councilor Kristin Szakos went to the Virginia Festival of the Book. At this literary event, she pointed out that it might be time to reconsider the presence of the monuments of the Confederacy. There was a gasp when she made this comment: it was as if, she pointed out, that she had said it was "OK to torture puppies." Last year, another city councillor, Wes Bellamy, moved the council to remove the Lee statue and rename the park. The council, early this year, agreed to remove the statue and in June named the garden Emancipation Park. The Lee statue's removal would have been significant because it is perhaps the most prominent of the Confederate memorials.

The election of Donald Trump was widely welcomed by the repellent sections of American politics, from the American Nazi Party to the heritage associations of the Confederacy. At a National Policy Institute conference in Washington, D.C., in November 2016, its leader, Richard Spencer, beamed as his audience chanted "Hail Trump! Hail Our People! Hail Victory!" in an echo of "Heil Hitler," the German Nazi chant. Spencer and his fascist friends feel that Trump's comments in favor of "white rights" advantaged them. No wonder then that the various Nazi and Confederate groups, including the Ku Klux Klan and militia groups, decided to march onto the campus of the University of Virginia and to Emancipation Park to make their stand against the removal of the Lee statue. Bathed in racism, these groups found it intolerable that the symbols of the Confederacy be touched.

What they did not count on was the emergence of a wide and deep sense of antipathy to their politics. Ordinary people, anti-fascist groups and various Left organizations took to the streets to confront their arrival in Charlottesville. The fascists attempted to provoke violence, and indeed one of their adherents drove his car into the anti-fascists, killing Heather Heyer, a 32-year-old activist, and injuring many others. Justin Moore, the Grand Dragon for the Loyal White Knights of the Ku Klux Klan said plainly: "I'm glad that girl died." Andrew Anglin, editor of the website The Daily Stormer, wrote that he was also glad that Heather Heyer died because she was unmarried and had no children. Anglin found her life, therefore, of "no value." The harsh invective from the American Right combines hatred of women with hatred of minorities. It is a kind of toxicity that is familiar from the White House.

Donald Trump's senior adviser, Steve Bannon, hastily left the White House a few days after the events in Virgina. By all accounts, he had planned to leave in the next few weeks. The Nazi rally in Charlottesville, greatly embarrassing for the Republican Party, hastened his departure. Bannon had come to Trump's side a year ago from his perch at Breitbart News, a pillar of the Nazi-style American Right. He had shouted about the decline of white power and of the erosion of America's role in the world. Bannon wanted Trump to withdraw from trade deals and to be more aggressive with U.S. military action abroad. Multilateralism and globalism remain the enemies for Bannon. His close association with the "alt-right," the Nazi variant of the American Right, meant that Trump was being isolated increasingly from even moderate Republicans. Bannon had to go.

Related Topic(s): Confederate Statues; Hatred; Nazism; Rally, Add Tags
Add to My Group(s)
Go To Commenting
The views expressed herein are the sole responsibility of the author and do not necessarily reflect those of this website or its editors.