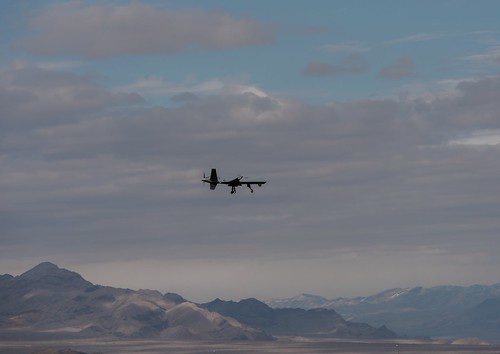 MQ-9 Reaper ( Predator B) drone at Creech Air Force Base in Indian Springs, Nevada
(Image by A Train)   Details   DMCA

"The strike on the vehicle on 29 August . . . killed 10 members of one family, including six children, relatives told the BBC."

The drone is a Reaper,

The missile it fires is a Hellfire.

There you have it.

The person who programmed the drone is a nobody,

A minion of the Great Satan

Who corrupts or explodes whatever he touches.

But who are we who stand by?

Does that phrase ring a bell?

You might not be needed yet but -- stand by.

When Satan gives the nod or wink you must all push your buttons.

You didn't know about the two buttons?

They're right next to your conscience.

Red means: Don't do it, count me out, this is insane etc.

(But the red button isn't connected, it's just a prop.)

Green is: Go ahead with my blessing.

Blow up anything or anyone you want.

I'll look the other way.

Call it whatever you want: vengeance, two eyes for an eye,

(Other missiles are called Mr Clean and Spic and Span

An everyday antibacterial missile that kills bacteria and viruses

On contact and is effective as a disinfectant when used as directed.)

Call it any kind of righteous google-gook.

Call it doin' Hell's work but someone has to do it.

Any time any place anywhere,

Call it the price of living the good life.

Call it the new amorality.

As long as the Reaper's mission is farrrrr away.

We're good with it.

Tomorrow will be two minutes, 56 seconds shorter than today.

That's all that matters really.

I can live with that.

That's about how long it takes to brush my teeth

Or pick what Netflix I want to watch

To keep reality at bay.

Why am I posting this the day after 9/11? That wasn't wholly intentional, but, as I thought about it, I realized the timing is relevant. Remembering 9 / 11 awakens all kinds of emotions in us, all of us, especially those of us who recall the shock of watching the towers fall to dust in real time. And right afterwords, that ominous lull for two or three days, when the sky was that bright flawless blue, like a blank slate, and I for one wondered (albeit not in these exact words), What will be written on this great blank slate? Personally I saw it as a time to revision what our world, our country, is about and who do we, Americans, want to be going forward? Are we going to get angry after the grieving . . . our eyes, just red from restless, sleepless nights and tears, flaming with the red blood of vengeance? I saw that same knee-jerk, vengeful rage flare up in Biden's speech after the suicide bombings at the Kabul airport killed 60 Afghans and 13 US troops. And I thought, wearily, Here we go again! When will it ever end? The only winner in this mutually destructive eye-for-an-eye-world is that nameless spirit (of many names) that seems so ready to kill, lash out and hunt down "the enemy" at any cost . . . In this poem I name this Spirit "Satan", but it could just as easily be Bin Laden or Nixon (who was about to drop a nuclear bomb on Hanoi) or anyone who thinks it's OK to wipe out human life with the pushing of a button.