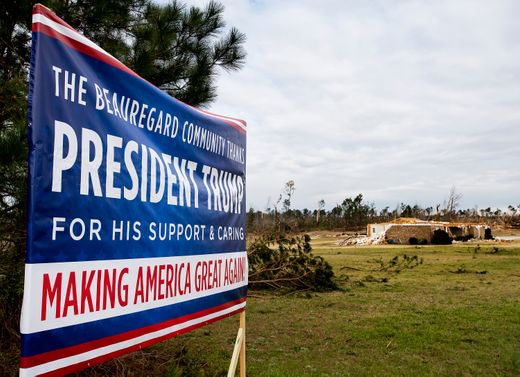 (Image by Themontgomeryadvertiser.com)   Details   DMCA
Can you hear it? Off in the distance the empty thudding sound. A sour note from a cracked bell. The sound of a bowling ball rolling down the alley with the anticipation of striking pins. Communications director number six, Bill Shine is out. His two hundred and forty days making him an old timer. Trying to turn a Pinto into a Lincoln, a chicken hawk into an eagle. It should be so familiar by now, "Comey better hope there aren't any tapes," I know more about ISIS than the generals. This vacuum-packed White House, this trailer park Conwayville and ghetto Sanderstown.

Shine has officially been kicked upstairs as a senior campaign adviser in the same way Jim Mattis was fired. A don't call us child we'll call you. But the thudding grows closer, Michael Cohen's testimony wasn't Russian guns in the East it was fighting in the streets of Berlin. It is on the Teirgarden headed for the Chancellery.

They haven't found the anonymous letter writer yet nor the informer of "Executive time" because this is malfunction junction, a Presidential ghost town. The Cheeto greeted the President of the Czech Republic to the White House this week. Nothing wrong with the Czech Republic, only it displays the caliber of who still calls. The Cheeto invited Mrs. Be Best to attend the meeting only to prove he wasn't a racist to prove he knows other Europeans. It's like Stalingrad the Musical, a slow-motion disaster. Traitors are everywhere from the Justice department to the Fuhrer bunker.

"They're trying to take a wrecking ball to my life," the Cheeto tells Lindsey Graham. But when you are spilling your guts to Lindsey Graham" the wrecking ball is nearly complete. The silence of the un- ringing telephone, the military parades that never were. That promised ride down the Mall in a golden coach. It was the biggest crowd in Inaugural history. Nixon once spoke to White House paintings in his under wear lost in a drunken haze. Our narcissistic dear one believes the paintings speak to him, he is lost and alone with traitors all about but is still willing to give them advice.

The credulity of an administration up to its eyeballs in ex-employees and tell all books. "Unhinged Madman" says former Reagan budget director David Stockman. Continuing, "Delusional Madman who will destroy the US economy."

"To be clear, ours is not the popular "resistance" of the left. We want the administration to succeed and think many of it's policies have already made America safer and more prosperous." Anonymous Op-ed.

Translate: we might be crazy, but we're not that crazy. A null version of Stockman's quote.

Obergruppen Fuhrer for Homeland Security Kirstjen Nielsen argues they aren't cages. Sure, they're made from the same materials as cages and assembled in the same manner as cages and have locks on the door like cages but they're, "areas of the border facility that are carved out for the safety and protection" of children in USCBP detention." Are we clear on that now? "Sir, they're not cages. We don't use cages for children, to my knowledge, CBP never put a child in cages."

This is the caliber which gets to keep their jobs, the sycophants the true believers. "Who are you going to believe, me or your own lying eyes?" Groucho Marx

It's not a concentration camp, it's a concentration camp we're trying to get them to concentrate. Think of it as day care with armed guards. The madness of King Ralph, "Now I hate to tell you, Puerto Rico, but you've thrown our budget a little out of whack." The good Germans get A+ treatment"here, let me sign that Bible for you.

I will build a great, great wall on our southern border. And I will have Mexico pay for that wall, but first I will give away two trillion dollars to the wealthy and rape the majority of average tax payers. Even in a world gone crazy this is beyond the pale. Deficit? Deficit? What Deficit?

"It can be done. "It will take place and it will go very quickly. " If you have the right people, like, in the agencies and the various people that do the balancing." Trump 2016

The lights of the White House are lit but no one is home. We have no foreign policy or domestic policy. There is no administration only a cabal of madness. Generals who won't answer White House calls. The latest job report says only twenty thousand jobs were created last month, the administration blames the weather. Sure, that one-week cold snap curtailed economic activity by ninety percent. The aggregate of hours worked is falling across the board. The wage growth is distorted by low gas prices and will disappear like snow in the Spring.

The rump Republican Reichstag has squeaked out a complaint against the Cheeto's emergency declaration. "I've been okay at predicting things, I think they put themselves at great jeopardy." Trump

The Cheeto now warns his own party"Give me what I want or I'll do"something. Great jeopardy"what's that? Is he going to have them shot on the lawn of the Chancellery? And what about Rudy Giuliani's pardon comment? Call me old fashioned, but isn't it traditional to wait for convictions before asking for pardons? Don't bother investigating me"I'm already asking for a pardon.

Related Topic(s): Bible; Detention; Economic; Government; Pardon; People; Republican; Rocket; Traitors, Add Tags
Add to My Group(s)
Go To Commenting
The views expressed herein are the sole responsibility of the author and do not necessarily reflect those of this website or its editors.