A river runs alongside it, but if you're in downtown St. Louis, you'll have a hard time getting to it. In fact, you can barely see it--the Mississippi, that is--even from the grounds of the Jefferson National Expansion Memorial, better known as the Gateway Arch.

But that scenario could change dramatically by 2015--the 50th anniversary of the completion of architect Eero Saarinen's iconic, stainless steel monument on the St. Louis riverfront. How functional, costly, and aesthetically pleasing a revamped riverfront will be depends on decisions soon to be made by a panel of St. Louis big-shots, the US Parks Service, nationally known architects and urban planners, and citizens.

Bottom line, revitalizing the Arch grounds and the St. Louis riverfront is an exciting notion. A visit to the Arch grounds reveals the need: the crumbling staircase from the Arch to the waterfront; tree stumps along the "allees" leading to the Arch; the dark, dank and dirty parking garage at the north end. The Arch is still a mecca for travelers, and it continues to inspire: There's always at least one supine photographer trying for that ground-to-sky money shot of the Arch. So, further improving the Arch and St. Louis experience is a worthy endeavor.

The big, looming decision is to choose the architectural/design/urban planning team for the project. Earlier this week, the five finalists revealed their concepts. In a competition called "Framing a Modern Masterpiece," local, national and international design groups were challenged "better frame the iconic Arch and weave the national park backinto the fabric of the city and the region, by rejuvenating connections and re-energizing the area."

The concepts [more details here]are on display in an exposition that will travel around the St. Louis metro area until Sept. 24. Shortly after the exhibit went up at its first stop--the pavilion beneath the Arch--I took a look. The experience can be one of information overload, and you have to slog through some fairly b.s.-type verbiage--in small type--and sort through some highly conceptual and unrealistic drawings. I noticed a lot of people congregating around the maps on some of the exhibits, where they could realistically compare how they got to the Arch that day [it's not easy], to how they might get there under the new designs. It's heartening to see the interest and engagement in something that will define the "front door" of St. Louis for, possibly, the next 50 years.

Conveniently located near the large, colorful presentation boards are comment sheets for public input. Hoping that citizens' comments will be taken into account, I filled in the blanks. Here are some gut reactions, in no particular order, from a citizen with no particular expertise or credentials--just an interest in the obvious and logical goal of reconnecting a city with the river that created it in the first place:

Creative ideas that jump out

Okay, I'll say it: One of the presentations strikes me as just silly and unworkable, replete with floating globes and Disney-like architecture. One of the competition criteria [I'm paraphrasing] was to respect the flavor of Saarinen's original design. The beauty, simplicity and soaring grace of the Arch speaks for itself. Turning the grounds into a quasi amusement park adds nothing and would, in effect, undermine the vision. 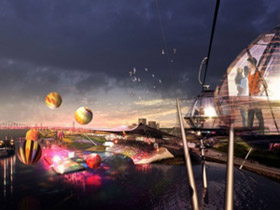 The biggest drawback of all five finalists' designs is their inclusion of a "lid" over the interstate highway [I-70] that roars between downtown St. Louis and the Arch grounds--an ugly scar, and a noisy, dangerous barrier. I've written about this before, and the tireless people at the non-profit, citizens' group, City to River, can explain it better, but here's the crux. The "lid" presented by the design teams may offer a safer and more scenic way to get to the Arch grounds, but it doesn't solve one key problem: It fails to offer a convenient connection between downtown St. Louis' two most-attended attractions--Busch Stadium, where a virtually guaranteed 3 million fans watch the St. Louis Cardinals play baseball every summer, and the Arch itself, with an annual visitor rate of more than 2 million. In the "lid" scenario, baseball fans have no straight-line route to the Arch. To get to or from the Arch, pedestrians would have to detour several blocks to the north to find the "lid" over the highway.

A better solution would be to remove the currently depressed lanes of I-70 [Memorial Drive] and to replace them with a grade-level city boulevard, which would offer a logical, visible, convenient and pleasant connection. This option was not included in the competition's parameters, presumably because highway removal [which requires environmental impact studies and such] could not be accomplished by the 50th-anniversary-ceremony-driven deadline of 2015. But the US Park Service has said that it favors highway removal, where possible, and four of the five design competitors have stated that the boulevard concept is a desirable approach [although this assertion appears as more of a footnote than a recommendation in their proposals.]

We can only hope that the decision-makers appreciate the long-term value of the highway-removal alternative, and that they don't simply default to the "lid," because of ceremonial time constraints. And one further caveat is in order: It would be sad [but predictable] if St. Louis adopted the "lid" as a "temporary" solution, with a vague promise of creating the boulevard in the undefined future. St. Louis hasseen these temporary solutions before, most notably the "temporary" Amtrack station-in-a-trailer [locally dubbed "Am-Shack"] that served as rail passengers' entry into St. Louis for more than 25 years. Let's hope the powers that be get it right this time.

Gloria Bilchik is a freelance writer based in St. Louis, Missouri. She is co-founder of Occasional Planet, a progressive blog focused on positive developments in government, creative thinking on current issues, and progressive people, programs and (more...)
Related Topic(s): Archeology; Future; Park; St Louis; View, Add Tags
Add to My Group(s)
Go To Commenting
The views expressed herein are the sole responsibility of the author and do not necessarily reflect those of this website or its editors.

March of crimes: Lessons from a grand jury

St. Louis Arch to get a makeover. One's citizen's view of the options

Secret holds in US Senate: A Tactic Only the World Wrestling Assoc. Could Love

A funny thing about a new CNN Poll: political/holiday satire, just for fun