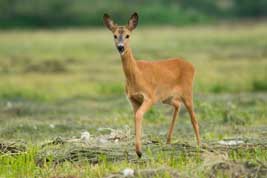 Many who live in urban areas are unaware and unconcerned about the spread of chronic wasting disease (CWD) among US deer herds. While hundreds of captive deer stricken with CWD have been euthanized on commercial deer farms in Michigan, Wisconsin, Illinois, Iowa and Pennsylvania and non-captive deer herds have reportedly been gravely affected, many think CWD is just a rural problem threatening only hunters and Departments of Natural Resources (DNRs) which depend on hunting licenses for revenue. Recent scientific reports suggest otherwise.

CWD is similar to mad cow disease (BSE) and always fatal in animals and humans. It is caused by microscopic "prions" which are not inactivated by cooking, heat, autoclaves, ammonia, bleach, hydrogen peroxide, alcohol, phenol, lye, formaldehyde or radiation. Prions remain in the soil indefinitely. In humans such a prion disease is called Creutzfeldt-Jakob disease or CJD. Recently Colorado Division of Wildlife personnel tried to eradicate CWD from a contaminated facility and found out just how indestructible prions are. They treated the soil with chlorine, removed that treated soil, then applied another chlorine treatment to the remaining soil and let the facility remain vacant for more than a year, Result? The soil still tested positive for the prion disease.

And now comes the news that CWD may be picked up by plants. According to University of Texas Health Science Center researchers, grass plants, their leaves and roots, can bind, uptake and transport infectious prions. Even highly diluted amounts of the infected prion protein were absorbed in the roots and leaves of the wheat grass in as little as two minutes said the researchers. The prion contaminated wheat grass also infected hamsters when fed to them. Wheat grass is often considered a healthful food and drink for humans.

And there is more reason for people who do not live in rural areas to fear prion diseases like CWD. Researchers at the National Institute of Allergy and Infectious Diseases, the University of California at San Diego and UC-San Francisco, suggest that people with CJD have the prions in their eyes. That means there is a risk for the disease to spread through eye surgeries or even routine eye exams due to prion-contaminated instruments speculate the researchers.

The researchers "found prions in all eight regions of the eye that were tested, including the eye's cornea, lens, ocular fluid, retina, choroid (a part of the eye that contains blood vessels and connective tissue), sclera (the white of the eye), optic nerve (which connects the back of the eye to the brain) and extraocular muscle (which controls eye movement.)," reported Live Science.

Like the prion-transmitted mad cow disease, widely believed to stem from the cost-cutting practice of feeding cows to cows, CWD may have man-made origins. In the mid-1960s, the Department of Wildlife ran a series of nutritional studies on wild deer and elk at the Foothills Wildlife Research Facility in Fort Collins, Colorado and soon after the studies began, however, Foothills deer and elk began dying from a mysterious disease. The CWD in the deer may have been caused by sheep held at the same facility which had scrapie, say researchers.

It is the official position of deer hunting-dependent DNRs that venison will not transmit the dread human disease CJD. Yet in 2002, the government reported just that. "Fatal Degenerative Neurologic Illnesses in Men Who Participated in Wild Game Feasts, was the name of a CDC report. Late last year a deer hunter died of CJD in North Dakota.

To reduce their CWD risk, DNRs warn hunters to wear surgical gloves when cutting up deer and to avoid exposing open cuts or sores on their hands. They tell hunters not to eat a deer's brain, eyeballs, spinal cord, spleen and lymph nodes but scientific articles say that muscle, blood, fat and other parts of the animal also contain prions including kidneys, pancreas, liver, saliva and antler velvet.

What can the average person do against these new risks? First, call an end to game farms. Deer breeding and "trophy farms" are a $4 billion a year industry. Farmers operate canned "hunts" in which bucks with trophy antlers can fetch prices in six figures. Customers of the operations are guaranteed a kill and the animals are sometimes drugged. Deer farm operators also sell antlers, velvet, urine and meat.

Captive deer operations are a main source of CWD due to their concentration of animals, "communicability window" (from trophy stock trading and escaped animals) and questionable feed sources. The Indiana Star, in a four-part expose, exposes how "the pursuit of deer bred for enormous antlers and shot in hunting pens" on trophy farms is spreading CWD at an alarming rate.

Secondly, beware of all venison since deer processors do not usually sterilize their equipment after each deer and cross-contamination can easily occur from diseased deer. Moreover, "farmed" deer and factory-farmed meat in general are fed slaughterhouse waste (rendered animal protein) which is contrary to organic rules: these dangerous meat products should never be consumed.

Third, protest the widespread trapping and killing of wolves. Wolves serve the important ecological purpose of culling diseased deer from the herda function which is lost when they are hunted and trapped.

Fourth, make sure your eye doctor is aware of the new and concerning risks presented by their patients who may have prion diseases.

Finally, call on the CDC to require autopsies on people whose death certificate reads "Alzheimer's disease" or "dementia." Many of these people, especially deer hunters, actually have died from CJD but are buried or cremated with no disclosure. The public deserves to know these risks which can be transferred through surgical instruments and bodily fluids.

Related Topic(s): Activism Environmental; Animals; Deer; Disease-Epidemics, Add Tags
Add to My Group(s)
Go To Commenting
The views expressed herein are the sole responsibility of the author and do not necessarily reflect those of this website or its editors.