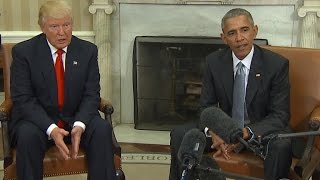 Obama or Trump, US government will remain an Israeli ally and benefactor.
(Image by YouTube, Channel: CBS News)   Details   DMCA

The nature of the rhetoric in Donald Trump's first speech at the United Nations General Assembly was largely predictable. Even his bizarre threat to "totally destroy North Korea" was consistent with his overall style and previous warnings.

But how different was his speech, if compared with the first and last UN speeches of President Barack Obama?

Soon after former US President Barack Obama's arrival in the Oval Office, Harvard Business School Professor, John A. Quelch injected Ruskin's quote to re-assert the need to strike the balance in US internal politics and foreign policy. Like others, he emphasized that Obama must utilize his positive image to restore "the American brand," which was badly tarnished during the two terms of George W. Bush.

Journalist and author, John Pilger was quite astute when he -- as early as 2009 -- raised the issue of the Obama brand.

Using a plagiarized slogan from the South American union organizer, Cesar Chavez, "S, se puede!" -- "Yes, we can!" -- the Obama campaign managed to breathe life into a greatly discredited US political system.

The brand was such a success that, even before Obama won the people's vote, the "Obama brand" also won the votes of hundreds of top advertising executives who granted the campaign the top award at the annual Association of National Advertisers conference. Thus the "Obama brand" became the "Advertising Age's marketer of the year for 2008."

The appreciation of words and skills at the expense of real action, continues to resurface whenever Trump sends an embarrassing tweet or gives a belligerent speech. His first speech to the UN on September 19 was a case in point.

But the fact is, despite the vastly different style -- Trump's confrontational approach compared with Obama's composed attitude -- their words promise "more of the same." To demonstrate, here are the main subjects they raised in their UN speeches, in their own words:

On Terrorism and Extremism

Neither Obama nor Trump took any responsibility for their country's direct or indirect role in fomenting terrorism -- for example, their country's military invasions of Afghanistan (2001) and Iraq (2003). Instead, they spread fear, while positioning themselves as the global safety net against terrorists and those who fund or support them.

Obama (2009): "Extremists sowing terror in pockets of the world; protracted conflicts that grind on and on; genocide; mass atrocities; more nations with nuclear weapons; melting ice caps and ravaged populations; persistent poverty and pandemic disease. I say this not to sow fear, but to state a fact: The magnitude of our challenges has yet to be met by the measure of our actions."

Trump (2017): "Terrorists and extremists have gathered strength and spread to every region of the planet. Rogue regimes represented in this body not only support terror but threaten other nations and their own people with the most destructive weapons known to humanity."

Related Topic(s): Obama Doctrine; Obama Middle East Policy; Rhetoric; Trump Foreign Policy; Trump Mental State, Add Tags
Add to My Group(s)
Go To Commenting
The views expressed herein are the sole responsibility of the author and do not necessarily reflect those of this website or its editors.