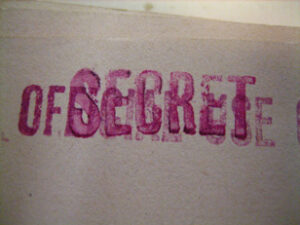 Seems the Occupy movement was targeted by Homeland Security before the first tent pole was raised, according to documents released in compliance with a FOIA request. Truthout.org has conducted exhaustive research on the surveillance and possible infiltration of the Occupy (OWS) movement and has discovered that, indeed, the Department of Homeland Security was closely monitoring the groups' activities.

Truthout was the first news organization to file a FOIA request with DHS  for OWS-related documents. In March, the agency released to Truthout nearly 400 pages of redacted documents that showed DHS officials (and in several cases, the Secret Service) closely monitored the eight-month old Occupy movement, gathered intelligence on the group and had disseminated internal threat assessments on OWS--actions which one DHS official characterized as possibly unconstitutional, according to the documents.

Wouldn't it be refreshing, Truthseekers, to read a government document that wasn't given the black-marker treatment?  Is our national security so threatened by transparency into it's possible invasive actions against innocent citizens?

Even the Pentagon's Northern Command unit, which exerts military control over any North American combat zones, was briefed on the goings on of the occupy protestors. Further, the White House was also coordinating DHS actions toward local law enforcement and the Occupiers. This is from CounterPunch.org:

"The latest documents, reveal 'intense involvement' by the DHS's so-called National Operations Center (NOC). In its own literature, the DHS describes the NOC as 'the primary national-level hub for domestic situational awareness, common operational picture, information fusion, information sharing, communications, and coordination pertaining to the prevention of terrorist attacks and domestic incident management.'

"The DHS says that the NOC is 'the primary conduit for the White House Situation Room.'

"Another document shows that earlier, in advance of a planned Occupy action at the Oakland, CA port facility on Nov. 2, DHS 'went so far as to keep the Pentagon's Northcom (Northern Command) in the intelligence loop.'

"Given the subterfuge revealed in these documents that went into trying to create the illusion that the DHS was and is not coordinating a national campaign of spying, disruption and repression against Occupy activists, it is almost comical to find documents that show the DHS was in 'direct communication with the White House' to obtain advance approval of public statements by DHS officials denying any DHS involvement in anti-Occupy actions."

The fact that President Obama has failed to make good on his promises to roll back the Bush Crime Family's domestic surveillance programs demonstrates that he is in favor of monitoring US citizens, particularly those who express displeasure with the status quo. That reality is underscored by recent disclosures by whistle-blowers about the massive extent of domestic spying approved by the current administration. Common Dreams reports:

"Binney's explosive disclosures over the past few weeks include: The first public description of Stellar Wind, the NSA's massive domestic spying program, which has the capacity to intercept trillions of domestic electronic communications of Americans, including e-mails, phone calls, and Internet activities. Adding that 'after 9/11, all the wraps came off for NSA, and they decided to -- between the White House and NSA and CIA -- they decided to eliminate the protections on U.S. citizens and collect on, domestically. So they started collecting from a commercial -- the one commercial company that I know of that participated provided over 300 -- probably, on the average, about 320 million records of communication of a U.S. citizen to a U.S. citizen inside this country.'"

Meet the new boss, same as the old boss. Boy, 9-11 sure opened the floodgates to all kinds of fun and interesting invasions of our privacy and civil liberties, didn't it, Truthseekers?  Don't you feel so much safer? knowing the government is protecting you from the fearsome dangers posed by the occupy protestors? I'm sure the corporations feel better.  They're people, too, you know. ...

Kathy never expected a career in radio as a talk show producer. Born and raised in Atlanta, Georgia, Kathy was completing her nursing degree when in 2001 - in an emergency - she was asked to fill in as the producer of Mike's program. Within a few (more...)
Related Topic(s): FOIA; Occupy; Pentagon; Spies; Surveillance, Add Tags
Add to My Group(s)
Go To Commenting
The views expressed herein are the sole responsibility of the author and do not necessarily reflect those of this website or its editors.