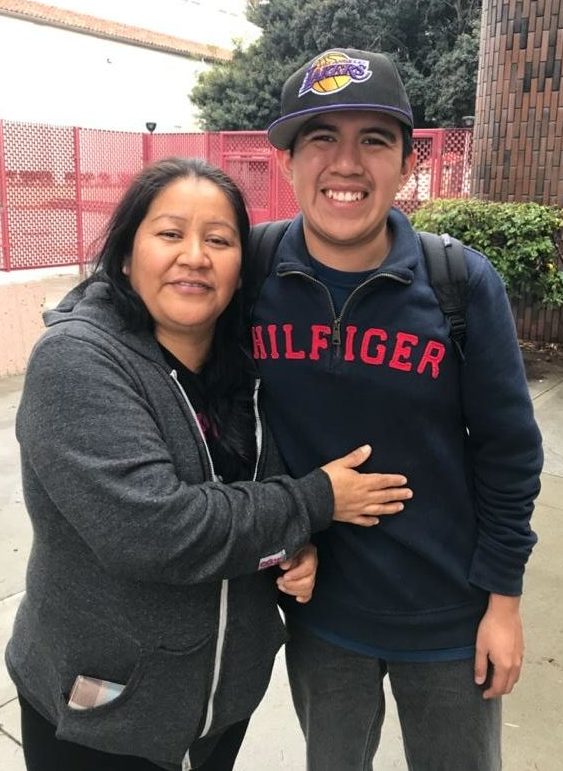 The face of Melvoin's injustice: A CTC West student and his worried mother
(Image by Tracy Abbott Cook)   Details   DMCA
"http://thewire.k12newsnetwork.com/2019/12/09/the-face-of-ctc-the-lack-of-transparency-by-those-in-power-savefairfax/?fbclid=IwAR2ITBuh4yIqA-VD44SrMxMAS8CqzfHyJAVzvj9qqgGX9hMVtT-surOuswM">I don't want him to stay in the house,

I want him to be happy and independent."

When the stakeholders at CTC West were first told about Nick Melvoin's plan to displace their special education school so that an elite middle school could be co-located on the campus of Fairfax High School, it was less than three weeks before the LAUSD school board was set to vote on the project. That period included the Thanksgiving holiday, further decreasing the likelihood that the stakeholders would be able to save their school. However, with the support of their allies on the Fairfax campus, they were able to draw enough attention to their plight, forcing Melvoin to pull the item from the agenda of the December 3rd board meeting. The Fairfax High community was told about the delay in the vote on December 3rd and the stakeholders of the CTC were not directly told until a robocall on December 9th. Once again, Melvoin shows his disdain for the special education community.

It is important to note that this reprieve for the students of CTC West is only temporary. Melvoin is still pushing forward with his plans for an elite middle school, even if it means displacing CTC West from the Fairfax site. While recognizing that career and transition centers have "unique needs", Melvoin's minions have failed to recognize that this includes a requirement for stability. A sudden push to find a new CTC location suggests the emphasis is more on clearing space for Melvoin's elite middle school. Therefore, the LD West/Melvoin promise "to provide an equal or better location and facility to best serve these students" rings hollow. Furthermore, the assurance that they will "further engage their families in this process" is insulting, given the fact that Melvoin or anyone from the district has thus far neglected to engage the parents of CTC West at all.

With the threat to CTC still active, a group of concerned parents descended on the school board meeting on December 3rd to express their demand for Melvoin's plan to be permanently abandoned. The following are my comments:

When Measure EE failed, I think one of the lessons that we should have learned was how poorly the public views this district. So when we have a winning program we should hold it up as an example, nurture it and make it better.

The Career Transition Centers (CTC) in our district are an example.

My two daughters are on the severe end of the autism spectrum and the CTCs that they attend have been miraculous. To watch my daughter come home from school, where she is in the farming program at the Miller CTC, dirty and exhausted as she stumbles off that bus and seeing how proud she is of herself. She musters up the little ability she has to communicate to tell me about her day and what she did with the horses.

These CTCs are phenomenal and to take them and say that they can be uprooted just because we need them for another purpose shows a profound lack of respect for the most vulnerable students in our district.

Nick, I think that you need to go to visit this school and see what they do for these students. These years are the last chance that the district has to mold them and to help them reach their full potential.

These students need our support. They aren't just throwaways.

This plan is just horrific. I hope that everyone else on this board will fight against it.

Related Topic(s): Special Needs Children, Add Tags
Add to My Group(s)
Go To Commenting
The views expressed herein are the sole responsibility of the author and do not necessarily reflect those of this website or its editors.