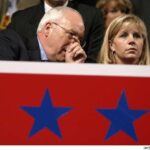 Here's a toss-up question for you: Which Cheney is more insane? Dick or daughter Liz? Okay.

That's a difficult one. Here's another: Which is more dedicated to the utter destruction of not only our experiment in government that reflects the will of the people (as opposed to government that is dictated by a corporate elite), but also the historical record of the past half century? Liz? Dick? Can't decide? I understand.

One more: Which Cheney is more hell-bent on abruptly ending the Obama presidency and replacing it with a right-wing totalitarianism that will make the Stalinist era of the old Soviet Union seem like a period of truth and justice? Still unable to choose? Completely understandable. They're both so far out of their f*cking minds the tether has snapped.

An example of Liz's dedication to the nutty and extremely dangerous fantasies of her lunatic father -- the war criminal who just keeps on going and going and going -- can be found on the op/ed page of today's Wall Street Journal a page that also is dedicated to terminating the Obama presidency. Under the headline "Obama Rewrites the Cold War," Cheney sets out to do exactly that. She first quotes Obama from his recent speech to Russian university students:

"The American and Soviet armies were still massed in Europe, trained and ready to fight. The ideological trenches of the last century were roughly in place. Competition in everything from astrophysics to athletics was treated as a zero-sum game. If one person won, then the other person had to lose. And then within a few short years, the world as it was ceased to be. Make no mistake: This change did not come from any one nation. The Cold War reached a conclusion because of the actions of many nations over many years, and because the people of Russia and Eastern Europe stood up and decided that its end would be peaceful."

Then, reaching deep into her, um . . . bag of tricks, Cheney writes, "The basis of the Cold War was not "competition in astrophysics and athletics." And, instantly, you gotta wonder what the reference is. Take another look at Obama's quote. Do you see a sentence that reads "the basis of the Cold War was competition in astrophysics and athletics"? Uh, no. No sane person would see that. And no sane person would write that Obama said as much. Especially since the quote is right there. However, being able to see words that are not there, words that, to the rest of us, do not exist, is one of the defining characteristics of paranoid schizophrenia.

But, like her dad, Liz, in addition to being severely detached from reality, is a not-so-crypto-totalitarian. Liz seeks rigid discipline; order; screams; strict rules enforced by ugly stuff perpetrated in dark cells wherein harsh punishments and ancient tortures are delivered with no mercy. She continues:

"It is irresponsible for an American president to go to Moscow and tell a room full of young Russians less than the truth about how the Cold War ended. One wonders whether this was just an attempt to push 'reset' -- or maybe to curry favor. Perhaps, most concerning of all, Mr. Obama believes what he said."

Liz is most pissed off, one can safely assume, by Obama's statement, "The Cold War reached a conclusion because of the actions of many nations over many years, and because the people of Russia and Eastern Europe stood up and decided that its end would be peaceful."

And that, sports fans, is pure, unadulterated, left-wing mockery of the glorious age of Reagan -- a period in which Dear Leader's forceful actions against the Russian Bear (cruise missiles, unchecked spending on weapons systems, the mad fantasy of SDI, the "Mr. Gorbachev, tear down this wall!!" posturing) and not, oh hell, no, not the resistance of the Polish Solidarity movement, or the Belavezha Accords (the agreement which declared the Soviet Union effectively dissolved and established the Commonwealth of Independent States in its place) or the insane Soviet war against Afghanistan, brought the end to the Soviet Union.

And since Liz was deputy assistant secretary of state and principal deputy assistant secretary of state for near eastern affairs from 2002-2004 and 2005-2006 surely she's familiar with the "Alma-Ata Protocol" signed on December 21, 1991, which confirmed the dismemberment and extinction of the Soviet Union. The representatives of all the Soviet republics except Georgia and the three Baltic states signed this agreement and there is no record of their giving a sh*t whether Ronald Reagan or George H.W. Bush were or were not aware of what had just occurred.

Mike Malloy is a former writer and producer for CNN (1984-87) and CNN-International (2000). His professional experience includes newspaper columnist and editor, writer, rock concert producer and actor. He is the only radio talk show host in America to have received the A.I.R (Achievement in Radio) Award in both (more...)
Related Topic(s): Elizabeth Cheney; Lies; Lies Cheney; People Dick Cheney; Repression; Tyranny, Add Tags
Add to My Group(s)
Go To Commenting
The views expressed herein are the sole responsibility of the author and do not necessarily reflect those of this website or its editors.