RT is interviewing the first man to walk in space, a Russian, then the American who followed him a few months later. At the height of the Cold War, on March 18, 1965, Alexey Leonov was the first human to expose himself to the rigors of outer space. His exploit was followed on June 3 by the American Ed White. Ten years later the two men shook hands in outer space, forming personal and familial ties that exist to this day -- even extending to their children, who have studied in each other's countries. [tag] 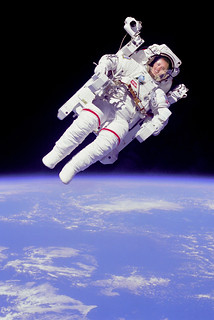 We are unlikely to witness a similar sentimental celebration in the US media, for the times, for the US, have changed dra-matically: In 1965 we were fearful of the Soviet ideology of socialism and its system of government, which developing nations viewed favorably, and which, if adopted in the US by some miracle of popular demand, would jeopardize the comfortable life-style of the ruling class. Today, the US no longer seeks to 'contain' a dangerous ideology, but to literally destroy a country via regime change and the subsequent carving up of its vast, mineral rich lands into easily manageable mini states, as part of its military/industrial/financial globalization of the world.

--Touching scenes between the chosen heroes of either side, which in the sixties illustrated a commitment to respecting and seeking to understanding those who choose different forms of government, are no longer found in the American media. Although space missions today involved participants from many countries, they are no longer held up as examples of mutual understanding, but rather, sadly, to show that everyone is on the same globalizing page. Astronauts are expected to gain as much experience and knowledge as possible for the companies that finance their trips. It's no longer about cumbaya, but about turning space into advantages for either side to exploit competitively.

And yet, if you watch today's RT story live or on-line, you will see that a good chunk of the narrative of the fifty-year old event is about the friendship between the cosmonauts' families that endures to this day, notwithstanding America's determination to see Russia as an enemy, not, supposedly for ideological reasons, but because it has not accepted our definition of democracy: elections for governing bodies that are mere fig leaves for the global control of everything.

While the former enemy has adopted a Western style of government -- labelled 'democracy' it has rejected globalization. Efforts to demonize Russia show that in today's world 'democracy' is not about elected ruling homelands, but world rule by oligarchs, as on-going mass anti-austerity protests across Europe testify, including the latest one at the shiny new European Central Bank in Frankfurt. Nuland's "f the EU" really meant "f democracy," and nothing illustrates that more clearly than her determined efforts to wrench Ukraine away from its centuries-long association with Russia. (By the way, RT is currently showing a documentary about the status Crimea going back centuries.)