"So you have people who were financing misinformation, on the one hand, and destabilisation, on the other, and who encouraged small groups of hoodlums to sow panic on the streets, to create the impression of a government losing control."
An Interview with Jean-Bertrand Aristide," July 20, 2006 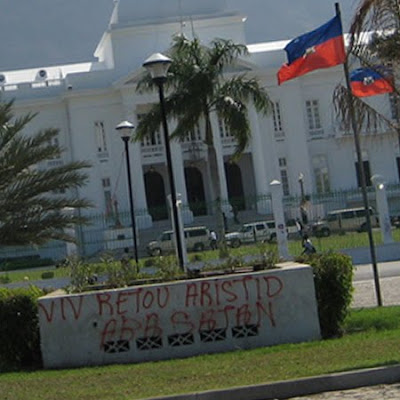 
That statement was made by President Aristide in 2006, but it is still appropriate for the situation in Haiti now. A UN food convoy was reportedly attacked by an armed group of men trying to hi-jack the supplies. One has to wonder, who are these fools, who would try to hold up a vehicle with men armed with powerful automatic weapons? These men couldn't have been armed with guns. What's more, no one was injured! The UN only fired warning shots. Unbelievable! What of the occasions when the UN occupiers have committed massacres; firing into shantytown communities, killing mothers, fathers and babies; or when a few brutally beat up Haitian policemen in their own barracks; or shot and killed a young man attending Pe're Gerard Jean Juste's funeral?

The carnage which began with Bush regime change did not stop when the UN occupiers took over, as chronicled by Ezili Danto's Witness Project:

5. "Bord", so called, a former soccer player, killed outside the police station at Cite' Soleil

6. Denis Gary, killed by MINUSTAH soldiers with a bullet to the head, Cite' Soleil

8. Marie Maude Fabien, age 28, shot by MINUSTAH soldiers April 23, 2005. She is still in the morgue because her parents haven't the means to bury her.

Bush regime change brought a bloodbath to Haiti, with the attendant massacres and human rights abuses. It's hard to believe that the UN occupier's disregard for Haitian life has just turned on a dime in a matter of days and they are just firing warning shots into the air now. The UN specializes in head shots. Their intent is not to maim, but to kill.

"And then when it comes to 2004-6, suddenly all this indignant talk of violence falls silent. As if nothing had happened. People were being herded into containers and dropped into the sea. That counts for nothing. The endless attacks on Cite' Soleil, they count for nothing. I could go on and on. Thousands have died. But they don't count, because they are just chimères, after all." Jean-Bertrand Aristide

To be fair when the UN occupiers first came in June 2004, they just bore silent witness to the killings by the Haitian police and the goons who served the oligarchy. It was not part of their mission to stop the carnage, so they did not intervene to stop it. It was not until April 2005 that the UN began to systematically brutalize the Haitian population. The terror intensified in July and December of 2005 when Brazilian troops leading the "military component" of the UN mission committed bloody massacres in the shantytown of Cite Soleil.

Prior to the massacres, Cite Soleil had been the launching point of mass demonstrations calling for the return of President Aristide and an end to foreign occupation of their country. The targeting of Cite Soleil for terror, death and violence is documented as occuring before planned demonstrations.

Although Emmanuel "Dread" Wilme was targeted as a "gang leader," his people knew him as a Community Leader and hero. On July 6, 2005, 440 soldiers shot heavy guns at the fragile homes of the shantytown dwellers of Cite Soleil for seven hours from their tanks and helicopters. A total of 22,000 rounds of ammunition were expanded to kill one man, but killed in the cross-fire were an estimated 59 others; innocent men, women and children. Dread Wilme died a slow and painful death from a gut wound--he was not yet thirty when he died. His people celebrated Dread Wilme by giving him an honorific African funeral pyre by the seaside.

HLLN: "None of those calling Drèd Wilme "bandit" have ever shown he traveled outside his community to attack either the foreigner who came to kill him in his own home, nor the morally repugnant Haitian bourgeoisie who paid assassins to destroy his community, his nation. In contrast to the bi-centennial Coup D'etat traitors, Drèd Wilme is known to the people in his community as a defender of the defenseless and poor. Again, we say, as we did last April, Wilme covered himself in glory because he added value in his own community, and if, in fact, he lives no more, he joins the line going back to that first Neg and Negès Ginen who can only - depi lan Guinen - live free or die. That unborn spirit, that Haitian soul, cannot die. It's rising."

In spite of all the terror and deaths, United Nations Destabilization Mission in Haiti has not been successful in stopping dissent in Haiti. When President Aristides' Fanmi Lavalas was banned from elections last April, the polling stations were empty due to a boycott. The same action was due to happen this February 2010, because once again the Provisional Electoral Council (CEP) decided to bar the country's most popular political organization (Fanmi Lavalas). To add insult to injury the Council approved the candidacy of Guy Phillippe's party. Guy had been one of the thugs leading the "rebels" calling for the ousting of Aristide. Astonishingly, Guy is supposedly the target of a DEA warrant.

MINUSTAH must have gauged that things would be coming to a head this month with the elections, and probably protests and boycotts. There were propaganda posters posted warning people that if they did not come out to vote, they could expect an increase in hunger for their country. The earthquake has preempted all that and now the elections have been postponed by the Haitian government.

Back to the convoy incident, it's hard to believe that the earthquake has so effected the aim of the "peacekeepers." Just this past November a man was shot who was part of a group of curious Haitians who approached a UN helicopter operating in the dead of night. Why was the UN mission that night so important that deadly force had to be used to repel unarmed townspeople?

"Residents of this quiet seaside town an hour west of Port-Au-Prince were awoken at about 1 a.m. on Nov. 10 by the sound of helicopters flying low overhead. A curious crowd amassed around the aircrafts.

One of the helicopters had mechanical trouble and had to make an emergency landing, said U.N. spokesperson Sophie Boutaud de la Combe. To lighten the load on the damaged helicopter, the Chilean crew moved white boxes of supplies into the other helicopter for several hours.

Chantal Laurent is a Haitian-American who blogs about Haiti, socio-economic, environmental and political issues at thehaitianblogger
Related Topic(s): Earthquake; Haiti; International Community; Media; Policy; United Nations; Us Foreign Policy, Add Tags
Add to My Group(s)
Go To Commenting
The views expressed herein are the sole responsibility of the author and do not necessarily reflect those of this website or its editors.