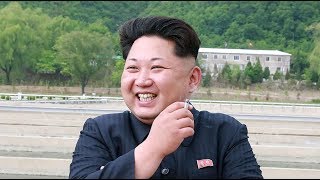 Media coverage of and political reactions to Donald Trump's announcement of a summit meeting with North Korean leader Kim Jong Un have been based on the assumption that it cannot succeed, because Kim will reject the idea of denuclearization. But the full report by South Korean President Moon Jae-in's national security adviser on the meeting with Kim last week -- covered by South Korea's Yonhap news agency but not covered in U.S. news media -- makes it clear that Kim will present Trump with a plan for complete denuclearization linked to the normalization of relations between the U.S. and North Korea, or the Democratic People's Republic of Korea (DPRK).

The report by Chung Eui-yong on a dinner hosted by Kim Jong Un for the 10-member South Korean delegation on March 5 said the North Korea leader had affirmed his "commitment to the denuclearization of the Korean Peninsula" and that he "would have no reason to possess nuclear weapons should the safety of [his] regime be guaranteed and military threats against North Korea removed." Chung reported that Kim expressed his willingness to discuss "ways to realize the denuclearization of the peninsula and normalize [U.S.-DPRK] bilateral ties."

But in what may be the most important finding in the report, Chung added, "What we must especially pay attention to is the fact that [Kim Jong Un] has clearly stated that the denuclearization of the Korean Peninsula was an instruction of his predecessor and that there has been no change to such an instruction."

The South Korean national security adviser's report directly contradicts the firmly held belief among U.S. national security and political elites that Kim Jong Un would never give up the DPRK's nuclear weapons. As Colin Kahl, former Pentagon official and adviser to Barack Obama, commented in response to the summit announcement, "It Is simply inconceivable that he will accept full denuclearization at this point."

But Kahl's dismissal of the possibility of any agreement at the summit assumes, without saying so, a continuation of the steadfast refusal of the Bush and Obama administrations for the United States to offer any incentive to North Korean in the form of a new peace treaty with North Korea and full normalization of diplomatic and economic relations.

That pattern of U.S. policy is one side of the still-unknown story of the politics of the North Korean issue. The other side of the story is North Korea's effort to use its nuclear and missile assets as bargaining chips get the United States to strike a deal that would change the U.S. stance of enmity toward North Korea.

The Cold War background of the issue is that DPRK had demanded that the United States military command in South Korea stop its annual "Team Spirit" exercises with South Korean forces, which began in 1976 and involved nuclear-capable U.S. planes. The Americans knew those exercises scared the North Koreans because, as Leon V. Sigal recalled in his authoritative account of U.S.-North Korean nuclear negotiations, "Disarming Strangers," the United States had made explicit nuclear threats against the DPRK on seven occasions.

But the end of the Cold War in 1991 presented an even more threatening situation. When the Soviet Union collapsed, and Russia disengaged from former Soviet bloc allies, North Korea suddenly suffered the equivalent of a 40 percent reduction in imports, and its industrial base imploded. The rigidly state-controlled economy was thrown into chaos.

Meanwhile, the unfavorable economic and military balance with South Korea had continued to grow in the final two decades of the Cold War. Whereas per capita GDP for the two Koreas had been virtually identical up to the mid-1970s, they had diverged dramatically by 1990, when per capita GDP in the South, which had more than twice the population of the North, was already four times greater than that of North Korea.

Furthermore, the North had been unable to invest in replacing its military technology, so had to make do with antiquated tanks, air defense systems and aircraft from the 1950s and 1960s, while South Korea had continued to receive the latest technology from the United States. And after serious economic crisis gripped the North, a large proportion of its ground forces had to be diverted to economic production tasks, including harvesting, construction and mining. Those realities made it increasingly clear to military analysts that the Korean People's Army (KPA) no longer even had the capability to carry out an operation in South Korea for longer than a few weeks.

Finally, the Kim regime now found itself in the uncomfortable situation of being far more dependent on China for economic assistance than ever before. Faced with this powerful combination of threatening developments, DPRK founder Kim Il-Sung embarked immediately after the Cold War on a radically new security strategy: to use North Korea's incipient nuclear and missile programs to draw the United States into a broader agreement that would establish a normal diplomatic relationship. The first move in that long strategic game came in January 1992, when the ruling Korean Workers' Party Secretary Kim Young Sun revealed a startling new DPRK posture toward the United States in meetings with Under Secretary of State Arnold Kanter in New York. Sun told Kanter that Kim Il Sung wanted to establish cooperative relations with Washington and was prepared to accept a long-term U.S. military presence on the Korean Peninsula as a hedge against Chinese or Russian influence.

In 1994, the DPRK negotiated the agreed framework with the Clinton administration, committing to the dismantling of its plutonium reactor in return for much more proliferation-proof light water reactors and a U.S commitment to normalize political and economic relations with Pyongyang. But neither of those commitments was to be achieved immediately, and the U.S. news media and Congress were for the most part hostile to the central trade-off in the agreement. When the North Korea's social and economic situation deteriorated even more seriously in the second half of the 1990s after being hit by serious floods and famine, the CIA issued reports suggesting the imminent collapse of the regime. So Clinton administration officials believed there was no need to move toward normalization of relations.

After Kim Il Sung's death in mid-1994, however, his son Kim Jong Il pushed his father's strategy even more energetically. He carried out the DPRK's first long-range missile test in 1998 to jolt the Clinton administration into diplomatic action on a follow-up agreement to the agreed framework. But then he made a series of dramatic diplomatic moves, beginning with the negotiation of a moratorium on long-range missile tests with the U.S. in 1998 and continuing with the dispatch of a personal envoy, Marshall Jo Myong Rok, to Washington to meet Bill Clinton himself in October 2000.

Jo arrived with a commitment to give up the DPRK's ICBM program as well as its nuclear weapons as part of a large deal with the United States. At the White House meeting, Jo handed Clinton a letter from Kim inviting him to visit Pyongyang. Then he told Clinton, "If you come to Pyongyang, Kim Jong Il will guarantee that he will satisfy all your security concerns."

Related Topic(s): Donald Trump And Kim Jong Un; North Korea; Peace Summit; South Korea, Add Tags
Add to My Group(s)
Go To Commenting
The views expressed herein are the sole responsibility of the author and do not necessarily reflect those of this website or its editors.