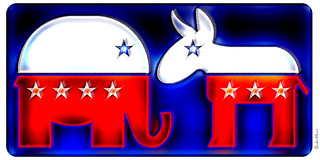 Here are five takeaways from the Republican primary in South Carolina and the Democratic caucuses in Nevada.

The populist revolt in both parties continues to build. In South Carolina, Donald Trump scorned George W. Bush, who is immensely popular among the state's Republicans; denounced the Iraq War in a pro-military state; savaged U.S. trade deals, was opposed by the governor, both senators and the Pope -- and still won big.

Trump is infamous for his nativist, anti-immigrant, anti-Muslim screeds. He also attacks ruinous establishment trade policies, condemns the "special interests and lobbyists" and money in politics, calls for rebuilding the country, brands corporate lobbyists "blood suckers" and more. He's rewarded by conservative Republican voters who see him as someone who "tells it like it is," is an "outsider," and will bring change.

In Nevada, the Sanders surge fell just short of Clinton, but only after she donned much of Sanders' garb from getting "unaccountable money out of politics"; to making certain "Wall Street does not threaten Main Street again"; while promising to do even more to address "systemic racism," sexism, and immigration. The establishment candidate eked out a victory by becoming more populist with each passing day.

Trump, now the odds-on favorite for the nomination, is an unelectable blowhard, the most disliked candidate in America. Ted Cruz, who came in a virtual tie for second in South Carolina, is so distrusted that he lost evangelicals to Trump.

Marco Rubio, the other side of the second-place tie, is now crowned the "establishment" candidate in the race. But Rubio is a career politician, a remarkably empty suit with a dodgy record of corruption. He was elected as a Tea Party insurgent, and is known in the Senate mostly for missing votes and for flip-flopping on immigration reform. His current domestic platform -- a goofy pledge of $11 trillion in tax cuts, largely for the very rich (ending the estate tax and the capital gains tax for starters), combined with larding $1 trillion more on the military over 10 years while passing a constitutional amendment to balance the budget offends addition, much less reason. His foreign policy consists of rousing calls for getting tougher everywhere -- Libya, Syria, Iraq, Ukraine; tearing up the Iran nuclear deal; reversing the normalization of relations with Cuba. He offers nothing except continued wars without end and without victory.

Led by Trump, Republicans are intent on offending Hispanics, suppressing black votes and insulting women. They would repeal Obamacare with no clear plan to replace it, and, with the exception of Trump, cut Medicare and Social Security. This is a party intent on committing seppuku. And nothing seems likely to get in the way.

Sanders lost the "expectations game" by a far greater margin than the caucuses in Nevada. In fact, the surge was stunning. Clinton once more had all the advantages -- universal name recognition, the state party gatekeepers, lots of money, and skilled organizers on the ground early. Six months ago, Sanders barely registered among voters; a month ago Clinton led by nearly 25 percent. As it was, she barely edged out a victory, saved largely by significant margins among the AARP crowd and black voters.

Once more Sanders captured truly breathtaking support from the young, winning voters under 29 by 82 percent to 14 percent, and those under 44 by 62 to 35. Entrance polls showed him winning Hispanic voters by 8 percentage points. (The Clinton campaign disputes these results, but who would have imagined a month ago that Clinton operatives would have to challenge entrance polls about who won Hispanics?) National union endorsements and support for Clinton was telling, with Sanders losing union workers 54-43. For the first time, a gender gap showed up, with Sanders winning men and Clinton women.

Once more Clinton won big among those who cared most about electability and experience. Sanders won huge margins of those who most valued a candidate who "cares about people like me" (72-26), and is "honest and trustworthy" (82-12). Eighty-two to 12 on those voting for honesty. Think about that.

Sanders is still introducing himself to voters, while Clinton enjoys both a long history, universal recognition, and nearly unanimous party and institutional endorsements. Against those odds, Sanders continues to rise. He faces a formidable obstacle in closing the gap in African-American support, but his surprising showing among Hispanics showed once more the power of his message.

Related Topic(s): Democratic; Medicare; Populism; Republican; Voting, Add Tags
Add to My Group(s)
Go To Commenting
The views expressed herein are the sole responsibility of the author and do not necessarily reflect those of this website or its editors.