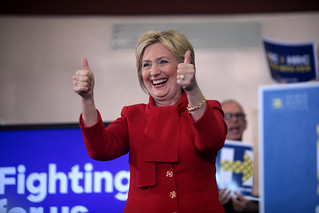 Sanders and Clinton have essentially split two states -- Iowa and Nevada -- and traded blowouts in two. Sanders drubbed Clinton in New Hampshire; she repaid him in South Carolina. March 2 is Super Tuesday, with 11 states, many across the South, making their decision. We'll know much more then.

Exit polls reported 61 percent of the voters in the Democratic primary in South Carolina were African-American (up from 55 percent in 2008). They went 84 percent to 16 percent for Clinton. Reports had her winning elderly African-American women by margins of more than nine to one.

The reasons for this are clear. Sanders was a virtual stranger to the state at the beginning of this campaign. Clinton has run here before; she and her husband have long, personal associations here. She had the support of the African-American political leadership and of the Democratic Party in the state. Sixty percent of the electorate decided on their vote before the last month and she won three-quarters of those voters. Seeking a knockout blow, she and Bill campaigned vigorously in South Carolina, whereas Sanders moved on to more promising Super Tuesday states. The Sanders campaign's hope that New Hampshire might provide real momentum here proved unfounded.

Clinton surely got her biggest boost by tying herself to Barack Obama. President Obama is popular among Democrats, and particularly among African Americans, who have had his back from the start. Clinton defended her foreign policy judgment by invoking Obama's faith in her, rationalized her Wall Street fundraising by comparing it to that of Obama, framed Sanders Medicare for All as an attack on Obamacare, and burlesqued Sanders criticisms of Obama as akin to those of Republicans. Exit polls reported that three-quarters of the voters wanted to continue Obama's policies, and Clinton won those 81 percent to 19 percent. Sanders won a majority of those who wanted more liberal politics than Obama.

In a rout like this, Clinton won virtually across the board -- both genders, races, incomes, across the ideological spectrum, on all issues and on all "candidate qualities." But some warning signs were still visible. Turnout was down from 2008 by 31 percent. Sanders won young voters -- 17-24 -- 60 percent to 40 percent. He won first-time voters (only 13 percent of vote) by nearly two to one (63 percent to 37 percent). Sanders won independents, 53 to 46 percent, and white men by 56 to 44 percent. Doubts about Clinton's honesty and trustworthiness remain; even among voters who gave her a landslide victory, she only edged Sanders out by 51 percent to 49 percent.

South Carolina's voters stand firmly with the president that they helped to elect. But they also carry pretty grim views of this economy and the country's direction. Only one in five (18 percent) thought race relations had gotten better over the last few years; 81 percent thought they had gotten worse or stayed the same. Nearly 80 percent thought the U.S. economic system generally favors the wealthy rather than being fair to most Americans. Eighty-four percent were worried about the U.S. economy (50 percent very worried) as opposed to 15 percent that were not too worried.

Voters across the country are looking for change. Clinton's efforts to present herself as the candidate of continuity worked in South Carolina, but may be more costly if she wins the nomination.

The mainstream media used the Clinton victory in South Carolina to start posting funeral notices for the Sanders campaign. In reality, Sanders is still building. He's still introducing himself to various parts of the country, and to constituencies beyond the white left. His message has such power that Clinton has chosen to recycle parts of it. After Super Tuesday, the campaign heads into industrial states that surely are fertile territory for him.

He's still an underdog, but he's come a long way from where he started in a remarkably small amount of time. And along the way, he is introducing Americans -- and young people particularly -- to common-sense alternatives that for too long have been excluded from our debate. To borrow Mark Twain, reports of his campaign's death have been greatly exaggerated.

Related Topic(s): Bernie Sanders; Clinton Campaign; Media; Southern Strategy, Add Tags
Add to My Group(s)
Go To Commenting
The views expressed herein are the sole responsibility of the author and do not necessarily reflect those of this website or its editors.