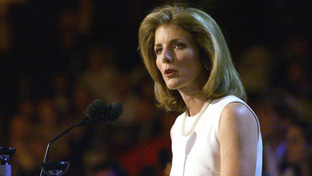 Worst idea of the week that didn't emanate from the White House: Caroline Kennedy for Congress.

Someone wrote in the New York Post recently that JFK's daughter was seriously thinking about running for either a Senate or House seat from New York. Actually, it's worse.

According to the Post: "'Caroline had a successful ambassadorial run in Japan and feels really very confident about putting her hat in the ring for a New York congressional or Senate seat, with even possibly bigger political objectives down the road,' said a source familiar with Kennedy's plans.

"And another close source revealed, 'Caroline is seen in some quarters as the next Hillary Clinton. She has the Kennedy name but no Clinton baggage.'"

And, might I add, no Clinton charisma, and we're talking Hillary here. In truth, her baggage was her charisma. It's all anyone ever talked about. Can she overcome it? Can she make good use of it? Can she lose it at the airport?

As for Kennedy, where to start? The Post article said that Kennedy recently ''stepped down" from her post as U.S. ambassador to Japan after serving three years. Well, yes, but that chump in the White House actually ordered all U.S. ambassadors to hand in their resignations before he moved in. So she was fired. No biggie. She doesn't need the money. But apparently some "confidantes" think she needs to do something big with the Kennedy name.

Maybe so, but politics is not diplomacy. In fact, these days it's as far removed from it as possible.

Kennedy made one brief foray into politics, in 2008, when she offered herself as a possible candidate to fill Hillary Clinton's Senate seat from New York after Clinton was nominated by President-elect Barack Obama to be secretary of state. It sounded like a natural step. After all, her uncle, Bobby, was a senator from New York.

It was a disaster. Turned out Kennedy had none of her father's gift for public speaking, failed to display her uncle's obvious passion for justice and had difficulty articulating answers to reporters' questions. She withdrew her name and Gov. David Paterson appointed Rep. Kirstin Gillibrand to fill the seat. Gillibrand ran in a special election in 2010, which she won. She was re-elected to a full six-year term in 2012 with 72 percent of the vote.

She has represented New York well and has been especially outspoken defending the rights of women in the military. There's no need for another Democrat to challenge her.

Nor is there any need for Kennedy to challenge Rep. Carolyn Maloney, who represents Kennedy's district on Long Island. Maloney has also been an effective member of Congress, especially fighting for rights of the victims of 9/11.

If Kennedy truly feels the need to run for Congress (as opposed to some aides looking for a new gig), she could move to another district and challenge, say, Republicans Peter King on Long Island, or Joseph Spano in nearby upstate. Democrats need to replace Republicans in the House, not knock each other off.

As for running for president, other than her name (whose attraction dims with each generation removed) and lots of money, Kennedy doesn't really offer much as a candidate. Being diplomatic with the friendly Japanese for three years is hardly preparation for the rigors of a presidential campaign. Besides, Democrats don't need another Hillary Clinton, baggage or not. They could, however, use another JFK. Maybe his daughter can help them find one.

Related Topic(s): Ambassador; Caroline Kennedy; Charisma; Congress; Diplomacy; Election; Hillary Clinton; JFK; New York; New York Post; (more...) President; Senate, Add Tags  (less...)
Add to My Group(s)
Go To Commenting
The views expressed herein are the sole responsibility of the author and do not necessarily reflect those of this website or its editors.