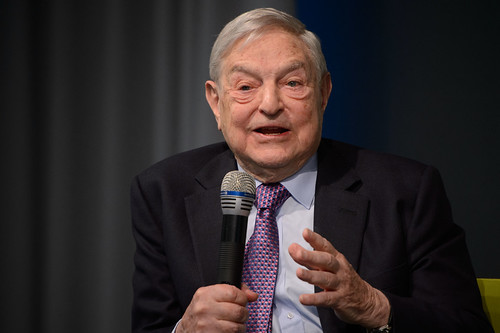 GEORGE SOROS, the American multi-billionaire, is causing Binyamin Netanyahu a lot of trouble.

At this particular moment, Netanyahu does not need any more trouble. A huge corruption affair, concerning German-built submarines, is rolling slowly and inexorably towards him.

Soros is a Hungarian Jew, a Holocaust survivor. The Hungarian governing party plastered his face all over Budapest with a text that barely hid its anti-Semitic intent. Soros' sin is his support for human rights associations in his former homeland. He does the same in Israel, though on a much smaller scale. So Netanyahu does not like him either.

This has created an awkward situation. Netanyahu was about to visit Budapest to meet his Hungarian opposite number Victor Orban, who is suspected of being a mild anti-Semite. Netanyahu considers him a right-wing soul-mate.

The Hungarian Jewish community was upset. They demanded that Netanyahu postpone his visit until the Soros posters were removed. Eventually most -- but not all -- of the posters were indeed taken down, and Netanyahu met with Orban. But the entire episode showed that the interests of the State of Israel and the interests of Jewish communities around the world are not automatically identical, as Zionists would have us believe.

THERE WAS another incident prior to the Hungarian meeting. A few days earlier, at a public event, Orban had lauded Admiral Miklos Horthy, the head of the Hungarian state during World War II, when Hungary cooperated with Nazi Germany like all of Eastern Europe (except Poland, which was occupied).

So how could Orban laud Horthy on the eve of Netanyahu's visit?

As a matter of fact, Horthy's role is still hotly debated. A self-declared anti-Semite and enigmatic person, he succeeded where no other European leader did: he saved many hundreds of thousands of Jews by disobeying and cheating Hitler.

One of them was an aunt of mine, who married a Hungarian Jew in Berlin and was deported by the Nazis to Hungary, where she survived, eventually reaching Palestine. Another was "Tommy" Lapid, a child in Budapest who became a famous personality in Israel. His son, Yair, is now a politician who seeks to supplant Netanyahu. He probably would not exist but for Horthy's devious actions.

I CANNOT resist interrupting here in order to tell a historical joke.

After Pearl Harbor, Hitler and his entire gang of foreign collaborators declared war on the US. The Hungarian ambassador in Washington was also instructed to submit a declaration of war to the Secretary of State, Cordell Hull, who decided to mock him.

"Hungary, Hungary -- are you a republic?" he asked.

"Really? So who is your king?"

Related Topic(s): Hitler; Israel; Occupation; Palestinian; Zionists, Add Tags
Add to My Group(s)
Go To Commenting
The views expressed herein are the sole responsibility of the author and do not necessarily reflect those of this website or its editors.