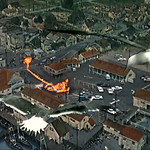 The Birds directed by Hitchcock
(Image by johnny.guernica)   Details   DMCA

Sonnet: Through the Abyssing Glass

I can't speak for the animals we named,

who watch as homo erectus slaughters

each other, murders the world unashamed --

brought into a world at the end of time,

a space without a future, completing

the selfishness of our species, no rhyme,

no reason left for genic competing.

down goes a forest, species, DNA.

"No one sees nothin', nobody talks smack --"

Broadcast that and then go the f*ck away.

And we live by a Dark Ages motto:

It is what it is. Cruise control, auto.

Related Topic(s): Animals; Denial; Forest; Future; Murder; Poem; Reality; Slaughter; Time, Add Tags
Add to My Group(s)
Go To Commenting
The views expressed herein are the sole responsibility of the author and do not necessarily reflect those of this website or its editors.