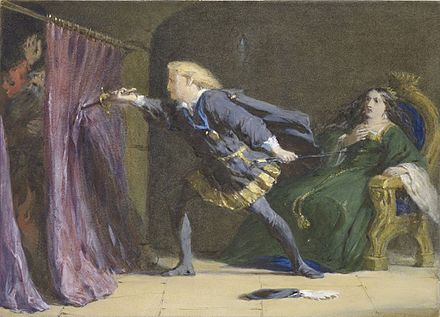 Hamlet stabs Polonius.like he said he would in the poem below.
(Image by Wikipedia (commons.wikimedia.org), Author: Author Not Given)   Details   Source   DMCA

Sonnet: Hamlet Being and Not Being Like Some DuckRabbit Who Can't Make Up His Mind

Wake up and smell the coffin, poltergeists

call out from behind the jiggly bushes

on the dark side of my mind, their tushes

I don't know what these noisy bastards want:

Command me to command them to f*ck themselves?

between my ears. Ho-ra-tio, they taunt.

about being true, I swear I'll kill him.

O! Back to Plutarch's Lives and Wagner's Ring.

said a liebfraumilchmaid I once dated.

Related Topic(s): Are You Being Served; Masks; Self; Self Help- Personal Growth; Self-destruction; Self-realization; Suzanne Somers; True Grit, Add Tags
Add to My Group(s)
Go To Commenting
The views expressed herein are the sole responsibility of the author and do not necessarily reflect those of this website or its editors.