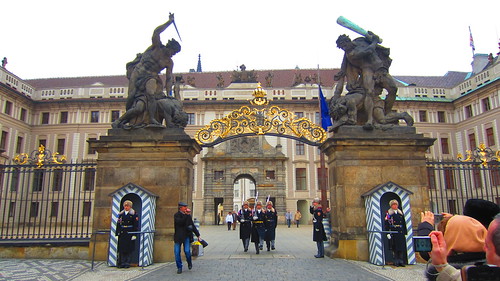 Changing of the guards at Prague Castle
(Image by shann.s.yu)   Details   DMCA

Sonnet: Beneath the Castle Where the Giants Are in Love

Someone was busting Kafka's balls again --

day-glo graffiti smirking in the dark

he read by the light of a firefly spark

imprisoned in a jar, no trial. When,

where, why? Who are they? What was it this time?

Was it because of certain dark changes

he proposed one night on the Charles Bridge, ranges

of thought expanding the scope of Man's mind?

Whatever it was he wrote on the wall

of the bridge in the dark had brought disdain

to his reputation, he sought a name

Related Topic(s): Down; God; Graffiti; Light; Love, Add Tags
Add to My Group(s)
Go To Commenting
The views expressed herein are the sole responsibility of the author and do not necessarily reflect those of this website or its editors.

STAY IN THE KNOW
If you've enjoyed this, sign up for our daily or weekly newsletter to get lots of great progressive content.
Series: "Poetry Reviews"