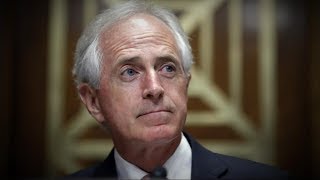 Sen. Bob Corker: 'It's a shame the White House has become an adult day care center' The senior senator is just the latest member of the Republican party at odds with Trump.
(Image by YouTube, Channel: ABC News)   Details   DMCA

There's been some serious hyperventilating lately regarding President Trump's mental stability with the latest coming from Senator Bob Corker -R. Tenn. who referred to Chief of Staff John Kelly, Secretary of State Rex Tillerson and Defense Secretary James Mattis as "those people that help separate our country from chaos". Corker then added the White House is "an adult day care center", to which President "tweeter" shot back Corker "didn't have the guts" to run for re-election.

A group of 27 psychiatrists conclude, "Mr. Trump in the office of the presidency is a danger to the public and the international community". [1]

One of the 27, psychiatrist Bandy Lee put it succinctly, "They're not making a diagnosis" but "the specific symptoms, the severity of the symptoms, an inability to accept facts, rage reactions, an attraction to violence, a proneness to incite violence-all these things are signs of danger".

Any thinking person could hardly disagree with the assessment by these mental health experts. Most of us are simply laymen when it comes to assessing anyone's character and we're often wrong in our judgments.

Not with Trump. His tweets are a dead giveaway to the man's reactionary character and inability to reflect before blurting out against any perceived slight.

I'm no expert on intricacies of the 25th Amendment to the Constitution but there seems to be a groundswell pushing the amendment be applied as a way to remove Trump from the presidency.

It would be unprecedented for a president to be "drummed" out of office by people from his own party controlling both Houses of Congress.

Remember Nixon resigned over the Watergate cover-up when Democrats controlled the House of Representatives and were ready to impeach him. Meanwhile a Democratic Senate was ready to convict him.

Trump could prove the exception. When the powerful Chairman of the Foreign Relations Committee essentially says Trump is out of control; Trump declared unfit under the 25th Amendment could be in the offing.

Yet maybe not. When one reads the 25th Amendment it's no small matter to remove a president-which seems to have been written with a future president in mind having developed Alzheimer's and clearly couldn't function. Not someone like President "tweet"; someone clearly unimaginable when the 25th Amendment was written and later became part of the Constitution.

I believe there's less than a 50-50 chance of Trump being removed via the 25th Amendment with Republicans controlling both Houses of Congress. Two thirds in both Houses are required to vote in favor of removing a President. That's a lot of votes. It's doubtful that many Republicans would have the guts to do so with their own re-election prospects on the line. Especially in states who voted for Trump where many of his followers refuse to acknowledge the danger he represents.

Stay tuned. As Yogi Berra said, "It ain't over till it's over".

Retired. The author of "DECEIT AND EXCESS IN AMERICA, HOW THE MONEYED INTERESTS HAVE STOLEN AMERICA AND HOW WE CAN GET IT BACK", Authorhouse, 2009
Related Topic(s): Trump Attacks Senator Corker; Trump Mental State; Trump Tweets, Add Tags
Add to My Group(s)
Go To Commenting
The views expressed herein are the sole responsibility of the author and do not necessarily reflect those of this website or its editors.