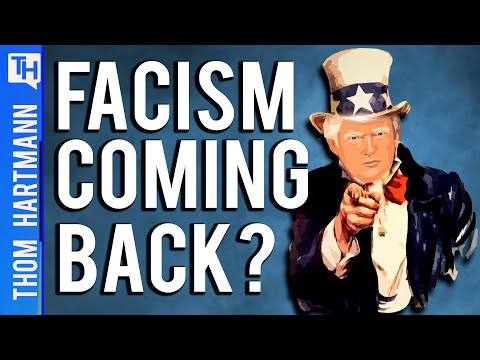 Trump Is What Happens When Americans Forget What Fascism Looks Like
(Image by YouTube, Channel: Thom Hartmann Program)   Details   DMCA

Two years after Donald Trump won the presidency, the author of "How Fascism Works" assessed him in a video. "It might seem like an exaggeration to call Trump a fascist," Yale professor Jason Stanley said. "I mean, he's not calling for a genocide or imprisoning his own people without due process. But ... if you use history and philosophy as a guide, it's easy to see parallels between Trump's words and those of the most reviled fascists in history. That scares me, and it should scare you too."

Drawing on his decade of studying fascist propaganda, Stanley concluded: "If you're not worried about encroaching fascism in America, before long it will start to feel normal. And when that happens, we're all in trouble."

We're all in trouble.

Trumpism has started to feel normal. Trump stands a good chance of winning re-election in November. And his odds have improved because the Democratic Party is expected to nominate an abysmal candidate.

For ample good reasons, many progressives disdain Joe Biden. He has a long record as a corporate servant, ally of racial injustice and avid supporter of the military-industrial complex. Now, in the midst of the coronavirus pandemic, he scarcely seems able to articulate anything worthwhile.

In short, as the two contenders with a chance to win the presidential race, Biden and Trump are offering a choice between neo-liberalism and neo-fascism.

To hear a small but significant portion of the U.S. left tell it these days, that's not a meaningful choice. Some say preventing the re-election of Trump isn't important. That amounts to ignoring political reality, an evasion with potentially vast consequences.

"We should make no mistake," longtime progressive journalist Juan Gonza'lez said days ago, "that this country is edging closer and closer to neo-fascist authoritarianism."

That reality doesn't stop some on the left from evading it -- preferring to conflate the two major parties to a degree akin to denial.

Earlier this month, I listened to a discussion that included an eminent left author who flatly declared that on "all major issues" there is "no real difference between the Democratic and Republican parties." A preposterous claim.

Soon afterward, I read an article by an editor at a high-quality left magazine that displayed odd complacency about whether or not Trump gets a second term: "The most likely outcome if he wins re-election is not a crude dictatorship, but further erosion of civil liberties within the existing political framework. Opposition parties and media will still be able to function. The people who suffer the worst forms of oppression under Trump will be the immigrants and ethnic minorities whose rights are routinely violated under Republican and Democratic presidencies alike."

Related Topic(s): Fascism; Fascist; Immigrants; Trump; Trump Is A Thug; Trumpism, Add Tags
Add to My Group(s)
Go To Commenting
The views expressed herein are the sole responsibility of the author and do not necessarily reflect those of this website or its editors.