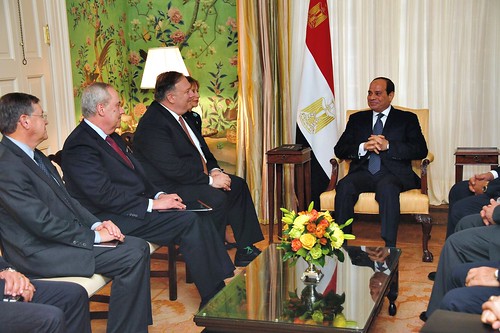 Secretary Pompeo meets with President of the Arab Republic of Egypt El-Sisi
(Image by U.S. Department of State)   Details   DMCA

Some 144 people have been executed since US-client Field Marshall President Abdul Fatah el-Sisi seized power overthrowing the elected President Mohammad Morsi in July 2013, the Times reported on Sunday (May 26).

More than 2,440 people have been sentenced to death in Egypt since President Sisi began a crackdown on opposition after coming to power six years ago, according to new figures released by UK-based human rights group Reprieve.

There were five trials in which more than 75 people were sentenced to death at the same time. Among them were at least ten minors.

Ahmed Saddouma was 17 when he was accused of taking part in "terrorist acts" in 2015, and was given a death penalty in a mass trial last year.

On February 20, 2019, Egypt executed nine men over allegations of killing the country's chief prosecutor, Hisham Barakat, in 2015. Nine young men told the judges during their trial that their confessions were taken under torture.

One told the judges that he was threatened by his torturers saying that they would take his parents and do what they want. Another young man told the jury "give me a taser, and I will make someone confess that he killed Sadat."

Huseyin Alptekin, Assistant Professor at Istanbul Şehir University, wrote, "Those nine young men would be alive with their families today if only the West had not supported Sisi. This is about the concrete and tangible Western support for dictators like Sisi. Unlike the toppled president Morsi, Sisi has nothing else other than Western support."

"Egypt is one of the scenes where the Arab Spring ended up with an Arab Winter. Egyptians overthrew a military-backed dictator, (Air Force General) President Mubarak, only to be crushed by another, Sisi," Alptekin added.

Human Rights Watch (HRW) has accused the Egyptian regime of el-Sisi of carrying out enforced disappearances, killings, torture and other illegal acts.

In a 134-page report titled If You Are Afraid for Your Lives, Leave Sinai!, the group said it documented arbitrary arrests, enforced disappearances, torture, extrajudicial killings, forced evictions, and possibly unlawful air and ground attacks against civilians.

HRW compiled the report over two years interviewing more than 50 residents of the Sinai Peninsula, in northeast Egypt, where independent media coverage is effectively banned and a state of emergency has been in force since 2013.

Some died in custody because of ill-treatment and lack of medical care, HRW said, citing former detainees.

Children as young as 12 have been detained in routine sweeps, eventually being jailed in secret prisons.

Author and journalist. Author of Islamic Pakistan: Illusions & Reality; Islam in the Post-Cold War Era; Islam & Modernism; Islam & Muslims in the Post-9/11 America. Currently working as free lance journalist. Executive Editor of American (more...)
Related Topic(s): Arrest; Egypt; El-sisi; Fatah; Gaza; Judges; Mohammed Morsi President Of Egypt; Torture; Trials, Add Tags
Add to My Group(s)
Go To Commenting
The views expressed herein are the sole responsibility of the author and do not necessarily reflect those of this website or its editors.