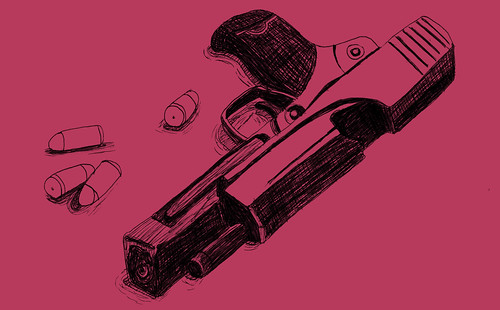 Gun
(Image by lookcatalog)   Details   DMCA
>
Yes, there are solutions to gun violence.
There are no 100% solutions to gun violence.
But, we can institute certain partial solutions, greatly diminishing the deaths and woundings that occur every day.
Clearly, they understood that allowing everyone to have any kind of "arms" was dangerous to the public. We are a nation of laws. Regulation always has been and always will be, the key to public safety.
Even gun enthusiasts would be first to admit that the public should be prevented, by regulation from "keeping and bearing" certain "arms": 50 caliber machine guns or bazookas or cannons or poison gas, or surface to air missiles , or atomic arms, etc.
So the question is not one of regulation vs. no regulation, but merely what kind of regulation.
And the Constitution tells us the answer to that question: "A well-regulated militia." That is the kind of regulation needed.
Street gangs are criminal enterprises under RICO.

Under RICO, a person who has committed "at least two acts of racketeering activity" drawn from a list of 35 crimes--27 federal crimes and 8 state crimes--within a 10-year period can be charged with racketeering if such acts are related in one of four specified ways to an "enterprise".

Those found guilty of racketeering can be fined up to $25,000 and sentenced to 20 years in prison per racketeering count.
In addition, the racketeer must forfeit all ill-gotten gains and interest in any business gained through a pattern of "racketeering activity.
Despite its harsh provisions, a RICO-related charge is considered easy to prove in court, as it focuses on patterns of behavior as opposed to criminal acts.
Some patterns of activity include:

It shall be unlawful for any person who has received any income derived, directly or indirectly, from a pattern of racketeering activity or through collection of an unlawful debt. (Bottom line: Every gang member does this, so merely belonging to a gang is considered a crime.)

. . . to acquire or maintain, directly or indirectly, any interest in or control of any enterprise which is engaged in, or the activities of which affect, interstate or foreign commerce. (For example, if your gang deals in drugs, guns or women, you, as a member of the gang, are liable.)
. . . to conspire to violate any of the provisions [of the law]. (Even talking about breaking the law with your fellow gang members is a felony.)
Your police know who the gang-bangers are. They have lists. The police could round up many of them, tomorrow.
But rather than arresting gang-bangers, again and again, only to see them let them loose back on the streets to shoot someone, we can break up the gangs and take the gangsters off the streets permanently.
Place a heavy, annual tax on guns. Make gun ownership expensive.The ostensible purpose of the tax would be to pay for the widespread death, injury and damage to this nation and to its citizens, caused by guns.
Anyone caught with a gun, for which no tax has been paid, would be subject to jail, and have the gun confiscated and destroyed.
Denying that guns are a danger to innocent people, while claiming that guns protect "good guys," as the greedy gun manufacturers tell us, simply hasn't worked, cannot work and never will work.
Rather than foolishly continuing to repeat failure, common sense must prevail.
There is no way to identify in advance, the so-called "good guys" who should have guns. A "good guy" can become a "bad guy" in an instant, given some minor provocation or no provocation at all.
Even many mass killers have been seeming "good guys," by any of the myriad definitions.
The only solution is over time to make guns harder and harder to get and use, by a four-pronged offensive:
--Remove the profit motive from gun manufacture and sales
--Eliminate gangs
--Greater penalties for gun carry during felonies
--Make gun ownership expensive
Anyone, sincerely hoping to reduce gun violence will renounce the insatiable gun manufacturer's profit-motivated propaganda, and recognize that for a safer society we must begin to reduce the number of guns in the hands of the populace.
There are many things we are not allowed, yet we agree to the prohibitions, because we understand we must give up something to gain something. That is what being in a society means.
We must give up guns to achieve a safer society.
Other nations have done it. We Americans can do it, too.

Related Topic(s): Felony; Guns; Law; Militia; NRA; Shootings, Add Tags
Add to My Group(s)
Go To Commenting
The views expressed herein are the sole responsibility of the author and do not necessarily reflect those of this website or its editors.