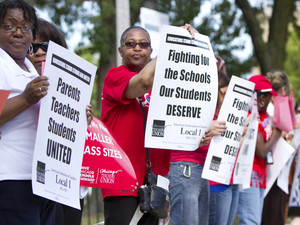 For the first time in 25 years, Chicago teachers are on the picket lines, the Chicago Teacher's Union having failed to reach a contract agreement with the Chicago Public School system. Obviously, a teacher's strike is bad for the students. That goes without saying. But this kind of fight is potentially devastating to public workers' unions throughout the nation. You remember unions, right? Chicago may be one of the last places in America where unions still retain the ability to fight for worker's rights, much to the dismay of Republican politicians who would like to see worker's rights returned to the rubbish bin.

Sadly, it seems they are winning. The failed recall election of Wisconsin Gov. Scott Walker earlier this year is clear evidence that organized labor in America is on life-support. The stakes are high on this one. If this union fails to attain the slight concessions it seeks, it could further damage the traditional bargaining power held by other unions throughout the country while strengthening the growing precedent of political/corporate power trumping worker's rights.

It is also bad news for President Obama, whose detractors are doing their dead-level best to tie Obama to his Chicago history and relationship with current (unpopular) Chicago Mayor Rahm Emanuel. Worse, organized labor has a tradition of voting a straight Democratic ticket, but the lack of support this president has shown labor unions since assuming office is not winning him many friends in the local HQ's. Obama made a potentially fatal error in not "putting on his comfortable shoes" and walking the picket lines with Wisconsin public workers as he promised when he was still candidate Obama, and that lack of action may well cost him dearly in November.

The strike just began today, but Team Mittens' media manipulators are already out in force with a pathos-laden public statement suggesting Obama doesn't care about the plight of these poor children. TPM has this to say:

"Obama has not taken sides in the standoff between Chicago Mayor Rahm Emanuel, the president's former chief of staff, and the city's teachers union.

"But Romney, who routinely slams teachers unions as an obstacle to education reform, is trying to break that silence by accusing Obama of cuddling up too close to labor in general.

"'President Obama has chosen his side in this fight, sending his vice president last year to assure the nation's largest teachers union that 'you should have no doubt about my affection for you and the president's commitment to you,' Romney said in a statement. 'I choose to side with the parents and students depending on public schools to give them the skills to succeed, and my plan for education reform will do exactly that.'

"The Republican nominee said he was 'disappointed by the decision of the Chicago Teachers Union to turn its back on not only a city negotiating in good faith but also the hundreds of thousands of children relying on the city's public schools to provide them a safe place to receive a strong education.'"

If the feigned compassion for poor little Chicagoland schoolchildren doesn't trigger your gag reflex, nothing will.  RomRyan's proposed plan for the Department of Education is to make it "a heck of a lot smaller" and possibly combine it with another agency it in the name of balancing the budget. Can you imagine a proposal to shrink the Defense Department, or combine it with another agency? The Neocons would go wild! But talk of cutting funds to the education of our children?

Enough with the holier-than-thou hand-wringing about the marginalized children, elder Willard. We ain't buying it this time.

Kathy never expected a career in radio as a talk show producer. Born and raised in Atlanta, Georgia, Kathy was completing her nursing degree when in 2001 - in an emergency - she was asked to fill in as the producer of Mike's program. Within a few (more...)
Related Topic(s): Children; Concessions; Democratic; Republican; Schools; Solidarity, Add Tags
Add to My Group(s)
Go To Commenting
The views expressed herein are the sole responsibility of the author and do not necessarily reflect those of this website or its editors.