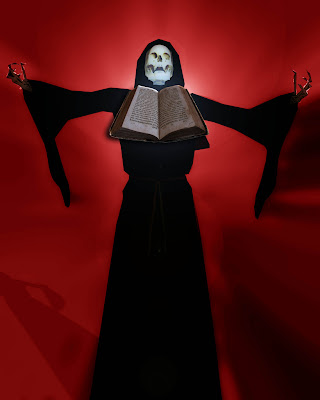 I'm not making this stuff up! Our thanks to Dr. Valerie Tarico for letting us know about this latest humanitarian miracle!

Solar Powered Bibles for Haiti:
Why Some Christians Feel Compelled to Exploit Disaster

For solar powered Bibles or church-building to win out over food and medicine requires a religion that values conversion over compassion. But when we see this phenomenon at its worst, it is because someone in the thrall of a viral ideology has figured out some reverse alchemy that turns the precious gold of empathy into the lead of opportunism.

Dr. Tarico must have read my article about Pat Robertson and "God's Ambulance Chasers." Now I have a bona fide reference to turn to when arguing about some Christians' compassion. Even mainstream Christians are having a rough time over the "donations".

They claim that "the Proclaimer is self-powered and can play the Bible in the jungle, desert or" even on the moon!" I'm sure that it would be more helpful there than in Haiti. Because, in Haiti, a solar-powered Bible will be as helpful as the Genesis according to Eddie Izzard. With the exception of some brave local affiliates and The Young Turks this situation has not gotten much coverage. I wonder why. Does the media think it's too lightweight? Or that any coverage would be insulting to Christians overall?

Perhaps it hasn't been covered because it would be an insult to Haitians. When the tsunami devastated southeast Asia years ago, Jerry Falwell dared to send 600,000 scriptural tracts and the response was a cold "thanks, but no thanks" by populations that were mostly Hindus and Muslims.

The maker and marketer of "The Proclaimer," Faith Comes By Hearing insists that relief groups are clamoring for it. The website shows a mass of people reaching for something being given out, but you can rest assured that it isn't an audio bible or that they're even near one.

Faith Comes By Hearing, an international Audio Bible group, is working with Convoy of Hope to provide spiritual relief in Haiti.

Unfortunately, Convoy of Hope would rather have the cash:

Many agencies try to motivate donors with the mathematics of the situation. Jeff Nene, a spokesman for Convoy of Hope, a Springfield, Mo., agency that feeds 11,000 children a day in Haiti, urges cash donations that allow his group to buy in bulk from large suppliers and retailers.

Rev. Dan Vojir is has been writing/blogging on religion and politics for the better part of ten years. A former radio talk show host (Strictly Books " Talk America Radio Network) and book publisher, Dan has connected with some of the most (more...)
Related Topic(s): Christian-taliban; George W Bush; Haiti Earthquake; Humanitarian; Misguided Charity; People Falwell Jerry; People Robertson Pat; Religion; Video Youtube, Add Tags
Add to My Group(s)
Go To Commenting
The views expressed herein are the sole responsibility of the author and do not necessarily reflect those of this website or its editors.