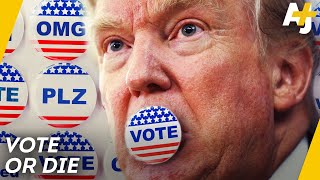 Why The 2018 Midterms F*cking Matter | AJ+ The U.S. midterm elections are on November 6th, and they're about so much more than President Trump or Russia or the Mueller investigation. We spoke to ...
(Image by YouTube, Channel: AJ+)   Details   DMCA

Yes we had an election yesterday with the Dems. recapturing the House while the Repubs. retained control of the Senate.

But really does it matter whether the Dems. or the Repubs. are in the majority? Our elections aren't capable of fundamentally changing anything in this country. The status quo remains the same.

The major policies and actions of "official" Washington remain in place. Why? The majority of Dems. and the Repubs. are all in on it.

We're a war based economy. Hot war, cold war that doesn't matter. And it's not about winning or losing a war, hot or cold. It's all about having un-ending war. Which takes "enemies". And it doesn't matter whether they're real enemies like Nazi Germany or Imperial Japan in WWII.

Since then it's been about contrived "enemies" like Communists and "Communism", terrorists and terrorism, now lately Russia, Iran, China, North Korea, Venezuela, Nicaragua or Cuba since 1959.

With "enemies" making for un-ending war the defense, "war" industry gets to build more weapons, aircraft carriers, nuclear subs, missiles and nuclear weapons, the $trillion dollar F-35 fighter plane, drones and attack helicopters, tanks, artillery, guns, ammo, a thousand or so military bases worldwide, fund the NSA electronic surveillance operations of everyone, the CIA and the other 16 national security agencies, fund independent corporate mercenary operations, use tax money to fund NGO's such as NED, the National Endowment for Democracy to undermine legitimately elected governments using agent-provocateurs to infiltrate and usurp legitimate protests groups, initiate coups, assassinate leaders to initiate regime change. Guess what? The majority of Americans go along with this charade.

Significantly, it should come as no surprise the war industry has facilities in all 50 states. That means jobs. And every Congressman or Senator in those states are going to make sure those jobs continue with all the legislators campaigns underwritten by the war industry crowd.

There may be the de-industrialization all over America but that doesn't include the anchors of the war industry like Lockheed Martin, Boeing, General Dynamics, Raytheon, Northrop Grumman, their subsidiaries, suppliers, sub-contractors making parts and equipment. The tentacles of the war industry reach deep into every significant institution in this country.

So we had an election. Will that change any of the above? The American people ready to rebel against the war industry that has co-opted so many into its deadly embrace? Not when their livelihood depend on it.

Americans may be angry, protest against this or that but are so fragmented and alienated from each other they may individually lash out or as we're reading about armed militia groups being organized ready to take on the immigrant caravan now in Mexico heading for the US border while Trump sends active duty troops to intercept them.

But what is this? Trump over reacting again while some of his gun toting crazies are ready to do what? Even the military doesn't want to be at the border. This caravan is mostly poor desperate people not terrorists and gang members as Trump has made them out to be. He insinuates these people are criminals and some of his crazies are ready to come packing. It's insane.

So are the Dems. soon to be in the House majority ready to go after the "Donald" for his foibles? Who knows. Just another distraction while the war machine continues unabated.

Retired. The author of "DECEIT AND EXCESS IN AMERICA, HOW THE MONEYED INTERESTS HAVE STOLEN AMERICA AND HOW WE CAN GET IT BACK", Authorhouse, 2009
Related Topic(s): Election Day, Add Tags
Add to My Group(s)
Go To Commenting
The views expressed herein are the sole responsibility of the author and do not necessarily reflect those of this website or its editors.