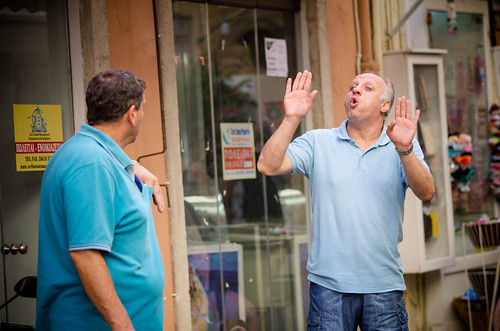 We want so much to believe that our world view is the most accurate. We say things like, "I tell it the way it is," or "it's simple"anyone can see it." This implies first what we observe is "out there" separate from us. And second that there is a specific, proper, and true way of seeing it--objective reality, that is.

Well, we have at least two choices. One is to keep insisting we see it "the way it is" until the day we die--like the religious extremists who die so their point of view will live on. Or open ourselves to the possibility that ours is just one point of view, not the entire picture.

You see it's like a person who stands very near a painting, able to see only a few inches of it, and makes declarations about the whole painting.

Continuing the metaphor of the painting, we're all putting strokes of color, texture, shape and form on that canvas. If we insist on only seeing ours, we'll never see the beauty of the finished painting on the canvas we call reality.

These days, the finished painting is not as beautiful as it could be. Not that it ever really was, because this problem didn't just start recently. It's in our DNA. Some linguists have argued that the reason we developed language was to coordinate our actions with others. More recent evidence suggests it was to win arguments about whose point of view was right.

Both ideas make sense. After all, coordinating our actions worked quite well when we were casually hunting and leisurely gathering food. But winning arguments about who's point of view was more accurate was a much faster way to help a panicked clan escape a predator or enemy.

Either way we can learn something from our ancestors in the jungle. Those who were able to resist the urge to be right on every point usually lived and reproduced so their genes are conserved in the human genome. After all, if another person's point of view is better fit to the situation it seems like a simple matter go along to save your own skin.

Well that may have be truer in the jungle than it is in modern times. Or at least it looks that way from this vantage point. There are lots of folks out there insisting their point of view is the most accurate and no one is going to convince them otherwise. They should thank the ancestor that passed along their genes. But their offspring may be as lucky.

Insisting on a point of view that doesn't fit reality is a pretty easy way to pass into irrelevance and condemn your progeny to the same.

Related Topic(s): Argument; Language; Reality; Who Is The Enemy; Winning, Add Tags
Add to My Group(s)
Go To Commenting
The views expressed herein are the sole responsibility of the author and do not necessarily reflect those of this website or its editors.