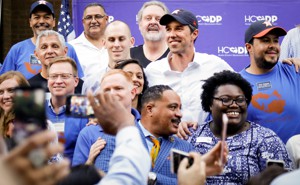 Democrats Like Beto O'Rourke Could Remake the Party
(Image by theatlantic.com)   Details   DMCA
>

The Democratic party is moving again, but it wasn't easy. It took a major insurgency by Bernie Sanders, inspired grassroots activists, and the worst, most offensive, most outrageously unethical and illegal president in U.S. history to get them their wave. To their credit, it's a wave they are managing to ride.

For decades, "the base" has been pushing the party to ditch the donors and return to community-based action. It's not clear whether the party ever heard that message or was just overrun by the same wave that washed away the Republicans.

In either case, the Progressive challenge has played a major role in reinvigorating the Democratic Party.

In fairness, Democratic control of the House is quite likely to help immensely in the effort to mitigate the damage being done to Western Democracy by Donald Trump and by proxy Vladimir Putin. The Democrats appear to grasp the scope of the threat and the exigency of the moment.

The power of subpoena is the most potent weapon the Democrats have at their disposal. Open hearings can also be used to great effect. Key Democrats seem to sense the magnitude of their new power and appear ready to use it. Open hearings have the capacity to engage the governed, also known as the voters.

It is difficult to overestimate political momentum generated by voter activism in the Trump era. Angry voters should be credited directly with saving ObamaCare. The "Blue Wave" was in practical terms a voter wave.

American voters have found their voice and with it their power, the vast power of Democracy. Now would be an excellent time to keep the pressure on. The big hurdle for the progressive wave comes when the movement has to separate the Democrats from the special interest donors.

It's easy to say "healthcare for all" or "expand Medicare" but achieving those goals means standing up to the unbridled profiteering of the healthcare industry. That's something Obama and the Affordable Care Act didn't even attempt to do.

They wanted people to have access to more affordable healthcare but they also wanted to find a way to protect the profits of the healthcare companies. The ACA's mandate largely achieved that and people, even people with pre-existing conditions, are covered, but it hasn't done anything to break the healthcare industry's ownership grip on healthcare in America. Americans still pay exponentially more for basic healthcare than citizens in other Western countries. Public options are at odds with private profits. This is where the rubber meets the road for the new Democratic Party. This is the bridge the voters who empowered them are waiting for them to cross.

So it was very encouraging to see people power at the polls, but there's a lot more work to be done. At least now we have a blueprint for success.

Related Topic(s): Democracy; Democrats; Democrats Progressive; Donald Trump Ego; Donald Trump Hate; Wave, Add Tags
Add to My Group(s)
Go To Commenting
The views expressed herein are the sole responsibility of the author and do not necessarily reflect those of this website or its editors.