The Second Amendment is an anachronism that's no longer relevant today. 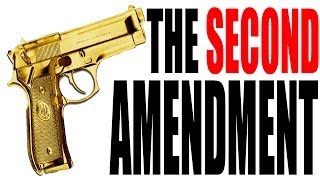 With the crazed assault in Las Vegas that killed over 50 and wounded hundreds as only the most recent example, America's gun violence problem has reached a breaking point. While we can talk all we want about assault weapons bans, universal background checks and terror watch lists, there's only one real solution to this problem: We need to repeal the Second Amendment.

Thanks to corporate media's unquestioning regurgitation of right-wing talking points, most Americans think that Second Amendment is in the Constitution to protect the rights of individual gun owners from the government.

But that's not even remotely true.

The "Second Amendment" as we know it today is a legal fiction invented by the gun industry and their buddies on the Supreme Court and sold to Americans by an expensive multi-decade-long PR campaign.

Despite what you might hear on Fox So-Called news, there actually was no "individual right to own a gun" until 2008, when the Supreme Court said there was in its decision in the case of District of Columbia v. Heller.

That decision, which struck down Washington, D.C.'s handgun ban, was the culmination of a decades-long push by the gun industry to twist the Second Amendment into something that would help it sell more weapons, and it had zero basis in real Constitutional history.

It's what former Chief Justice Warren Burger called a "fraud on the American public," and it's a fraud that now makes it very, very hard to put in place sensible gun control laws.

So, if the Second Amendment wasn't originally about protecting gun rights, why is it in the U.S. Constitution? What were the Founders thinking?

Well, the first and most obvious answer, and the one accepted by most historians, is that they were trying to prevent the existence of a standing army during times of peace.

The Founders were scholars of classical history, and they knew that history teaches that when given too much power, armies, repeatedly and throughout history, would overthrow democracy and put in place a military dictatorship. There's even a phrase to describe it: a military coup.

As James Madison told the Philadelphia Constitutional Convention in 1787,

"'A standing military force' will not long be safe companions to liberty. The means of defense against foreign danger have been always the instruments of tyranny at home. Among the Romans it was a standing maxim to excite a war, whenever a revolt was apprehended. Throughout all Europe, the armies kept up under the pretext of defending, have enslaved the people.

Related Topic(s): Constitutional Amendments; History; Second Amendment; Slavery, Add Tags
Add to My Group(s)
Go To Commenting
The views expressed herein are the sole responsibility of the author and do not necessarily reflect those of this website or its editors.