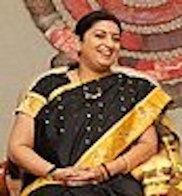 Smriti irani is a formidable opponent. You don't need Rahul Gandhi to tell you. Anybody who has engaged her in the Parliament, TV debates or open public forums would swear in the name of Allah. Barkha Dutt won't deny it nor would Rahul Kanwal. You could also ask Rashid Alvi (Who? Well, Congress). Or a collective opposition who were not safe even in their trenches as she rumbled in Parliament a few seasons ago.

In the above instances, Ms. Irani was dealing with hardened ideologues and masters of deception. Politicians who cook facts quicker than Maggi noodles. Journalists, those cloak and dagger assassins, without a trace of blood on their pen. Yet they froze like rats do when bathed in car headlights. You don't test the depth of a river with both feet, do you?

This is a woman who is not just a prima donna in front of cameras. Away from limelight, she walked hundreds of miles in countless visits to uproot the Prophet of Amethi. Door to door, ear to ear, shoulder to shoulder, in grime and dust, scorching sun or raining heavens, lending ears and shoulders in equal measure or corner of her saree to sponge the tears of wailing widows.

When Ms. Irani speaks, it's difficult to say if her Hindi is better than her English. When words in chaste Urdu are effortlessly slipped in. There is a flow and rhythm, snarl and contempt, all constructing a perfect mosaic. You are confronted with a holistic picture, its edges secured in the frame of clinching facts. When she performs, it's often better than her words. It makes material difference to the recipients; and not just aesthetics to its listeners.

We have no evidence where Ms. Irani cut her teeth in the unforgiving world of public gaze. To an unknown, a TV actress would be a guess too wide off the mark. It's like somebody telling you he outran an Audi. That she was an Alice looking for her wonderland in a Miss India contest once. That she also once donned checked blue shirt and trousers with apron to greet us in a McDonald cap in Bandra, Mumbai.

Yes, she worked in McDonald once. Clearing tables and sweeping floors. All for a princely Rs 1,800 a month. We wouldn't have known it but for a textile council securing her Provident Fund employee certificate from McDonald and toying with the idea if its auction could come to the aid of a group of women artisans. McDonald was a refuge when she was still nursing her rejection for an air hostess job. She was told she "lacked a good personality."

This is a woman who has made her own destiny. She prised open the door of TV soap operas and her main lead in "Kyonki Saas Bhi Kabhi Bahu Thi"(Because a mother-in-law was also a daughter-in-law once) is a TV legend like few have been. Apparently her talent was no less than her looks for she was deemed best actress for five straight years. She was a female superstar, if ever there was one, of the small screen.

Maybe stardom helped Ms. Irani in political arena. Maybe not for being a member of the Rashtriya Swayamsevak Sangh (RSS) in her childhood itself even though she joined BJP formally in 2003 only. Her grandfather, a member of the RSS, must have been an early influence. As would have been her mother, Shibani Bagchi (a Bengali) who was a Jana Sangh member. Her father, Ajay Kumar Malhotra, hasn't anything political known about him. Thus there are no rough edges here. She is an ideologically rounded person. She is married and has three kids and pictures of a happy family are aplenty.

Leaping through the ranks, Ms. Irani became national secretary of BJP in 2010. The same year she was heading her party's women's wing: BJP Mahila Morcha. Next year, she entered Rajya Sabha as a parliamentarian from Gujarat. Early in her career, she took on Kapil Sibal of Congress in the 2004 General Elections from Chandni Chowk constituency in the Capital.

In Narendra Modi's two cabinets, Ms. Irani has held various portfolios. An educated guess is that she has moved between portfolios, particularly in the case of Information and Broadcasting Ministry, because of her combative working style. She is eminently capable of ruffling a few feathers. We all know Narendra Modi would rather have his team concentrate on developmental work than lock horns in public with dimwits. She has relatively quiet and non-controversial ministries of Women and Child Development and Textiles in her latest brief. But all of us know, Ms. Irani would dominate the coming decades of Indian politics. In defeating Rahul Gandhi, she probably has caused the biggest upset not just of 2019 polls but in an entire generation. Just 43, here is a woman who is a role model for not just millions of her gender but many more in a rather ruthless, largely men's arena called politics.

Related Topic(s): Actress; Allah; Family; Gandhi; Parliament; Politics; Prophet, Add Tags
Add to My Group(s)
Go To Commenting
The views expressed herein are the sole responsibility of the author and do not necessarily reflect those of this website or its editors.