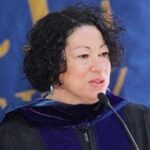 One expects Senator Orrin Hatch, the tight-lipped Brigham-Young grad, defender of polygamists and friend of Big Pharma, to attack Sotomayor on whatever basis available, be it her "wise Latina woman" remarks or possible position on gun laws. Or Jeff Sessions, the corn-mealy-mouthed Senator from 'Bama who never met a civil rights activist he didn't want to smear. He's another Honorable Senator to jump on the Sotomayor-bashing train during her confirmations hearings. As bad as these full frontal assaults are, recent television attack ads against the judge are truly beyond the pale.

A Conservative group -- weirdly reminiscent of the "Swiftboat Veterans for Truth" -- calling itself "the Committee for Justice" (CFJ) has spewed out a TV ad that resurrects William Ayers from the vaults of the anti-Obama campaign and furiously attempts to establish some absurd linkage between that former Weatherman, a Puerto Rican "terrorist" organization, and Sotomayor. The narrator in the ad states: "Remember Barack Obama's buddy Bill Ayers, the unrepentant terrorist who bombed American buildings in the '70s? Turns out President Obama's done it again: Picked someone for the Supreme Court, Judge Sonia Sotomayor, who led a group supporting violent Puerto Rican terrorists. Is this radical judge the type of person America needs sitting on our highest court?"

So we are to believe Sotomayor supports terrorists? Are these right-wingers serious? Salon explains the ridiculous charge this way:

The group the ad refers to is the Puerto Rican Legal Defense and Education Fund, which Sotomayor didn't actually lead - she was on the board for 12 years, and was at one point the vice-president of the board. And saying it "support[ed] violent Puerto Rican terrorists" is a stretch, to say the least. The PRLDEF supported clemency for members of a Puerto Rican terrorist group, the Armed Forces of National Liberation or FALN. But the drive to get then-President Clinton to offer clemency to them, along with other Puerto Ricans who were part of an FALN spinoff group, didn't begin until after Sotomayor had left PRLDEF's board. And it's not like supporting clemency for those prisoners was a fringe position - former President Jimmy Carter, the cardinal of New York and the archbishop of Puerto Rico were all on board, and Clinton eventually granted it."

The charge is specious and the connection to Sotomayor nonexistent. Not even Tough Talkin' Texan Senator and Sotomayor critic John Cornyn -- who fears terrorists everywhere, some Puerto-Rican, some not -- would go that far.

The second salvo from this collection of freaks on the so-called "Committee for Justice" comes in a fear-mongering attempt to scare the wingnuts into believing Sotomayor is (surprise! surprise!) after their guns. The CFJ released a letter signed by "more than two dozen leaders of the Second Amendment community from across the nation" asking Senators to reject the Sotomayor nomination because -- you guessed it -- she's coming for your guns. And there's no quicker path to the reactionary panic-button in a ditto-head's brainstem than threatening their right to carry weapons of various shapes and sizes into national parks, museums, schools, churches, and public urinals.

This particular criticism of Sotomayor centers on the three-judge ruling [she participated in] that upheld New York's law forbidding the use or possession of a popular gang weapon known as a nunchaku. "It is settled law . . . that the 2nd Amendment applies only to limitations the federal government seeks to impose on this right," the court said, citing an 1886 Supreme Court ruling. Gun rights "are now up for grabs in the court, so it brings a whole new constituency to this fight," Curt Levey, executive director of the Committee for Justice, told the LA Times. How the NeoCons make the leap from banning nunchakus to guns is beyond explanation or comprehension. But, then, the entire "locked and loaded" mentality the Charlton-Heston types harbor is a complete mystery to me.

The "Committee For Justice" is ramping up its fundraising efforts, hoping to raise enough cash to actually air these ads on TV. Currently they're relegated to the Internet. Funny that, as so many NeoCons want to see the Internet regulated to restrict the exact type of free speech they're currently using to smear Sotomayor.

Kathy never expected a career in radio as a talk show producer. Born and raised in Atlanta, Georgia, Kathy was completing her nursing degree when in 2001 - in an emergency - she was asked to fill in as the producer of Mike's program. Within a few (more...)
Related Topic(s): Guns; Justice; Law; Sonia Sotomayor, Add Tags
Add to My Group(s)
Go To Commenting
The views expressed herein are the sole responsibility of the author and do not necessarily reflect those of this website or its editors.