Make America Great Again, Drain the Swamp, and Lock Her Up! 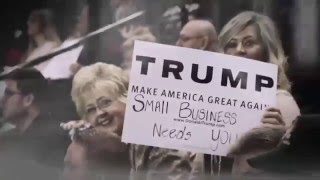 Nearly a year and a half into his presidency, Donald Trump continues to hold his base and maintain an approval rating of around 40% -- close to the same percentage he polled at just after his inauguration. Let's try to figure out why.

It can't be because he lies as a matter of daily routine. It can't be because he's giving away our store to big business -- engaging in crony capitalism, creating more tax loopholes for corporations, shredding corporate crime enforcement, knowingly exposing Americans to more toxic pollution, committing more business fraud, adding more hazards to the workplace, cutting access to health insurance, and thereby making America dread again.

It can't be because he's taking your tax dollars away from repairing your infrastructure back home -- schools, public transit, bridges, highways, airports, power grids, drinking water systems, etc., and pouring money into the bloated Pentagon budget beyond what even the Generals requested. (The huge "infrastructure project" he promised has yet to be proposed to Congress.)

It can't be because he is soiling our society's moral and ethical fabric and breaking the Golden Rule. (Trump is a peerless Oval Office bully, lashing out against the weak, powerless and defenseless.)

It can't be because he is openly holding onto his business interests and enriching himself from foreign vendors in unconstitutional ways, violating the Emoluments Clause (cases challenging his personal gains while in office are now in federal court).

Maybe it is because he is expediently against a woman's right to choose and common-sense gun regulation, selects corporatist judges, and keeps saying he loves his country (what politician doesn't?).

President Trump's words and deeds have not changed the minds of 40 percent of people polled. What else is going on here?

One answer is Slogan Voters. I've spoken to many people who are still for Trump despite all of his lies and misdeeds. They don't pay much attention to politics. When they do, they reveal themselves as Slogan Voters. They are content with Trump's rhetoric and rarely look beneath the surface at the details. That is, they are not bothered by being fact-deprived in political matters.

Here is what they tell me: They hate Hillary. They like Trump. They repeat the three slogans: Make America Great Again, Drain the Swamp, and Lock Her Up! Over and over again.

When I politely ask whether they are specifically aware of what Trump and his heads of departments and agencies are doing, they draw a blank. They explain that President Trump is shaking up Washington and draining the swamp. They believe that's the reason why he generates such an uproar from the swamp-dwellers. In a bizarre way, the more outrageously false and nutty Trump's tweets and actions are, the more these people feel that all the outrage is because he is draining the swamp and the swamp is lashing back at him.

Slogan Voters stress their belief in self-made men and women. They are often college-educated. They are not seen as bigots by their co-workers. They believe if you fail at something, it's your own fault.

They agree there are bad things going on in government, but it's not Trump's fault. Their reaction to bad things that are openly, brazenly, and admittedly Trump's fault -- such as shutting down a consumer agency designed to stop Wall Street and the financial/credit industry from cheating you, crashing the economy, or crippling environmental health protections -- is: It's all part of draining the swamp.

Related Topic(s): Delusion; Political Pandering; Political Style; Polls; Slogans; Supporters; Vote Suppression, Add Tags
Add to My Group(s)
Go To Commenting
The views expressed herein are the sole responsibility of the author and do not necessarily reflect those of this website or its editors.