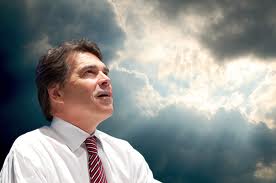 Hear that sucking sound? That's the stock market, continuing its downward spiral toward the drain. The 400-point drop is bad news for all major worldwide economies. They're not happy. According to CNN...

"Deutsche Bank downgraded its economic forecast for China, saying that a slow-down or recession in the U.S. or European economies would be 'the single most important shock to the Chinese economy,' and could slow the nation's GDP growth to 7%."

Meanwhile, President Obama is headed to Martha's Vineyard to decompress, regroup, and hopefully return with some kind of plan to dig us out of this hole before it's too late.

Speaking of troubled politicians, Rick Perry needs medication. His campaign is off to a slam-bang start, but not in a good way. First he insults Ben Bernanke in such a baseless and egregious way that even his own supporters backed away slowly from his comments and attack. As a follow-up act, Perry suggested to the Washington Post that scientists are faking research and making up data to show global climate change is occurring when it really isn't, just so they can get federal grant money.

How do you top that? Maybe with a claim yesterday that there are holes in the Theory of Evolution. According to USA TODAY ...

"The Texas governor was responding to a question from a little boy in New Hampshire, who was prompted by his mother to ask the Republican candidate about the age of the Earth and evolution. 'I hear your mom was asking about evolution,' Perry said today. 'That's a theory that is out there -- and it's got some gaps in it.' Perry then told the boy: 'In Texas, we teach both creationism and evolution. I figure you're smart enough to figure out which one is right.'"

And how do we welcome foreign exchange students who've come to America to participate in a student-visa program?  We enslave them in a chocolate factory, then threaten them with deportation and arrest if they try to organize a union.  Gotta hear this story to believe it, Truthseekers.  This ain't no Roald Dahl tall tale.

What is our children learning, indeed.

Kathy never expected a career in radio as a talk show producer. Born and raised in Atlanta, Georgia, Kathy was completing her nursing degree when in 2001 - in an emergency - she was asked to fill in as the producer of Mike's program. Within a few (more...)
Related Topic(s): Climate; Republican; Supporters; Texas Governor Rick Perry, Add Tags
Add to My Group(s)
Go To Commenting
The views expressed herein are the sole responsibility of the author and do not necessarily reflect those of this website or its editors.