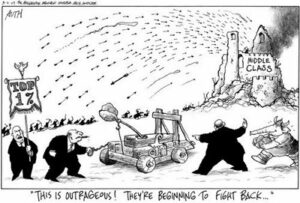 "Tonight, 18 Senate Republicans conspired to take government away from the people. In 30 minutes, 18 state senators undid 50 years of civil rights in Wisconsin. Their disrespect for the people of Wisconsin and their rights is an outrage that will never be forgotten," said Democratic Senate Minority Leader Mark Miller following the shocking and sneaky move by Wisconsin state Republicans to strip their constituents of their collective bargaining rights.


In light of this unspeakable horror Governor Scott Walker and his evil minions in the Wisconsin state legislature wrought against their own brothers and sisters in Wisconsin, we'd like you to read this excellent summary of events by a young liberal blogger who ties it all together. Read about how the Supreme Court ruling in "Citizen's United," Koch Inc., and Scott Walker combined to form a perfect storm of middle-class destruction. After reading this blog, there's no question that Walker and Koch Inc. are bedfellows, strange indeed.

Here's an excerpt that explains what could happen if Walker's budget passes, given the Citizen's United ruling:

"Scott Walker, whose second highest campaign donation was from the Koch brothers, would be able to sell Wisconsin's energy contracts to Koch Industries without allowing any other bidder come to the table. This would give them a monopoly over Wisconsin's energy."

You need to read the rest to understand how the dots are connected. It's a fascinating study in political corruption and unrestrained capitalism.

And these greedy bastards are far from finished. If you think it's bad in Wisconsin, wait until you hear what the Neocons want to do in Ohio and Michigan. The Koch brothers and their ilk won't stop until those of us struggling to survive the "new normal" in the "new" middle class is stomped out like the insignificant bugs they believe we are.

Kathy never expected a career in radio as a talk show producer. Born and raised in Atlanta, Georgia, Kathy was completing her nursing degree when in 2001 - in an emergency - she was asked to fill in as the producer of Mike's program. Within a few (more...)
Related Topic(s): Citizens; Corruption; Democratic; Republican; Wisconsin; Wisconsin Politicans Public Union Busting, Add Tags
Add to My Group(s)
Go To Commenting
The views expressed herein are the sole responsibility of the author and do not necessarily reflect those of this website or its editors.