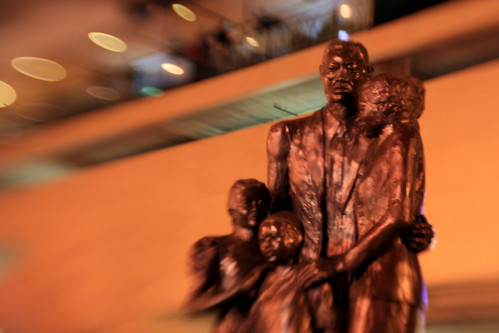 I recently debated a pro-war professor on the topic "Is war ever necessary?" (video). I argued for abolishing war. And because people like to see successes before doing something, no matter how indisputably possible that thing is, I gave examples of other institutions that have been abolished in the past. One might include such practices as human sacrifice, polygamy, cannibalism, trial by ordeal, blood feuds, dueling, or the death penalty in a list of human institutions that have been largely abolished in some parts of the earth or which people have at least come to understand could be abolished.

Of course, an important example is slavery. But when I claimed that slavery had been abolished, my debate opponent quickly announced that there are more slaves in the world today than there were before foolish activists imagined they were abolishing slavery. This stunning factoid was meant as a lesson to me: Do not try to improve the world. It cannot be done. In fact, it may be counter-productive.

But let's examine this claim for the 2 minutes necessary to reject it. Let's look at it globally and then with the inevitable U.S. focus.

Globally, there were about 1 billion people in the world in 1800 as the abolition movement took off. Of them, at least three-quarters or 750 million people were in slavery or serfdom of some kind. I take this figure from Adam Hochschild's excellent Bury the Chains, but you should feel free to adjust it considerably without altering the point I'm leading up to. Today's abolitionists claim that, with 7.3 billion people in the world, instead of there being the 5.5 billion people suffering in slavery that one might expect, there are instead 21 million (or I've seen claims as high as 27 or 29 million). That's a horrific fact for each of those 21 or 29 million human beings. But does it really prove the utter futility of activism? Or is a switch from 75% of the world in bondage to 0.3% significant? If moving from 750 million to 21 million people enslaved is unsatisfactory, what are we to make of moving from 250 million to 7.3 billion human beings living in freedom?

Nameless numbers should not be thought to diminish the horror for those currently suffering slavery or incarceration. But neither should they diminish the joy of those not enslaved who might have been. And those who might have been is much higher than a number calculated for one static moment in time. In 1800, those enslaved did not live long and were rapidly replaced by new victims imported from Africa. So, while we might expect, based on the state of affairs in 1800, to see 54.6 million people in the United States enslaved today, most of them on brutal plantations, we must also give consideration to the additional billions whom we would see flowing in from Africa to replace those people as they perished -- had abolitionists not resisted the naysayers of their age.

Is my debate opponent wrong to say that there are more people in slavery now than there used to be? Yes, in fact, he is wrong, and he is even more wrong if we choose to consider the important fact that overall populations have increased dramatically.

A new book called The Slave's Cause by Manisha Sinha is large enough to abolish various institutions if dropped on them from a significant height, but no page is wasted. This is a chronicle of the abolition movement in the United States (plus some British influences) from its origins up through the U.S. Civil War. The first thing, of many, that strikes me in reading through this valuable saga is that it was not just other nations that managed to abolish slavery without fighting bloody civil wars; it was not just the city of Washington, D.C., that figured out a different path to freedom. The U.S. North began with slavery. The North abolished slavery without a civil war.

The Northern U.S. states during the first 8 decades of this country saw all the tools of nonviolence achieve the gains of abolition and of a civil rights movement that at times eerily foreshadowed the civil rights movement that would be delayed in the South until a century after the disastrous choice to go to war. With slavery ended in 1772 in England and Wales, the independent republic of Vermont partially banned slavery in 1777. Pennsylvania passed a gradual abolition in 1780 (it took until 1847). In 1783 Massachusetts freed all people from slavery and New Hampshire began a gradual abolition, as did Connecticut and Rhode Island the next year. In 1799 New York passed gradual abolition (it took until 1827). Ohio abolished slavery in 1802. New Jersey began abolition in 1804 and was not finished in 1865. In 1843 Rhode Island completed abolition. In 1845 Illinois freed the last people there from slavery, as did Pennsylvania two years later. Connecticut completed abolition in 1848.

What lessons can we take from the history of the ongoing movement to abolish slavery? It was led, inspired, and driven by those suffering under and those who had escaped from slavery. A war abolition movement needs the leadership of those victimized by war. The slavery abolition movement used education, morality, nonviolent resistance, law suits, boycotts, and legislation. It built coalitions. It worked internationally. And its turn to violence (which came with the Fugitive Slave Law and led up to the Civil War) was unnecessary and damaging. The war did not end slavery. The abolitionists' reluctance to compromise kept them independent of partisan politics, principled, and popular, but may have closed off some possible steps forward (such as through compensated emancipation). They accepted western expansion along with virtually everyone else, north and south. Compromises made in Congress drew lines between north and south that strengthened the divide.

Abolitionists were not popular at first or everywhere, but were willing to risk injury or death for what was right. They challenged an "inevitable" norm with a coherent moral vision that challenged slavery, capitalism, sexism, racism, war, and all variety of injustice. They foresaw a better world, not just the current world with one change. They marked victories and moved on, just as those nations that have abolished their militaries could be used today as models for the rest. They made partial demands but painted them as steps toward full abolition. They used the arts and entertainment. They created their own media. They experimented (such as with emigration to Africa) but when their experiments failed, they never ever gave up.

David Swanson is the author of "When the World Outlawed War," "War Is A Lie" and "Daybreak: Undoing the Imperial Presidency and Forming a More Perfect Union." He blogs at http://davidswanson.org and http://warisacrime.org and works for the online (more...)
Related Topic(s): Slavery; Slavery-Forced Labor, Add Tags
Add to My Group(s)
Go To Commenting
The views expressed herein are the sole responsibility of the author and do not necessarily reflect those of this website or its editors.