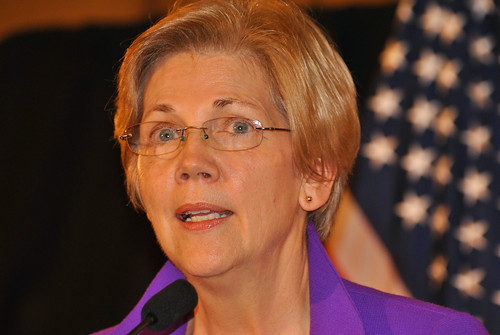 I never thought I'd run for the Senate. And, for a long time, I really didn't want to. But in the summer of 2011 I started to wonder: "Should I do this?"

And then I met a woman who helped make up my mind.

On a day so hot that it made your eyelashes frizzle, I held a meeting in downtown New Bedford to talk about what was happening to working families in Massachusetts -- and to see whether or not it made any sense for me to launch a Senate campaign. About 50 people were glued to their metal folding chairs -- not because of anything I said, but because the room had no air conditioning.

After the meeting, a woman in her mid-fifties came up to me. She told me she had walked two miles to attend the meeting -- because she didn't have a car.

Then she told me about her life: Two master's degrees. Smart as a whip. Taught herself computer programming. She was a hard worker, always had been, and had been searching for a job for a year and a half -- but got nothing. She took my hands, and she said:

"I'm here because I'm running out of hope. I've read about you for a long time, and I'm here to see you in person, to tell you that I need you, and I want you to fight for me. I don't care how hard it gets, I want to know that you are going to fight."

That was it. I was in this fight. So six years ago today, I announced my United States Senate campaign to represent the people of Massachusetts.

Six years later, I haven't regretted that decision for one moment. Fighting for working families in Massachusetts and across the country in the Senate is the greatest honor of my life. But I haven't done it alone -- over the past six years, you've been right by my side.

This fight was never about me -- it's about fighting for what we believe in. And these days, we need to fight even harder -- for good-paying jobs, affordable health care, fair immigration policies, and tax reform that doesn't just give more breaks to those at the top.

I don't kid myself: If the past six years seemed tough, that's nothing compared to year ahead. Donald Trump and Mitch McConnell are doing everything they can to rig the system even more for the rich and powerful. The right-wing machine and powerful interests will do everything they can to beat us in 2018. The fights to come are going to be bigger and nastier than we ever expected.

But we're going to keep fighting -- because if we don't fight, middle class families in Massachusetts and across the country can't win.

Each year I spend this day reminding myself why we got in the ring six years ago -- so we can level the playing field for hardworking Americans across the country. So I'm going to keep fighting. And I hope you'll continue to be right there with me.

Related Topic(s): Health; Jobs; Massachusetts; People; Policies; Senate, Add Tags
Add to My Group(s)
Go To Commenting
The views expressed herein are the sole responsibility of the author and do not necessarily reflect those of this website or its editors.