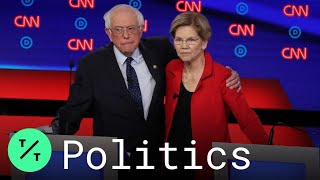 Why in the world should Elizabeth Warren choose to run for vice president?

The obvious answer that can save you the time of reading further or, you know, thinking, is my blatant sexism. Clearly, every time I've supported female candidates in the past for City Council, House of Delegates, Congress, and the White House has been part of an elaborate plot no doubt hatched in Moscow to create a cover for my secret but very real sexism, which I was saving for just this crucial moment. Also, my considering a dozen male candidates to all be dramatically worse than Elizabeth Warren is an obvious pretense and scam, as also therefore must be the positions I've taken on public policies for decades.

Or, there could be some other reasons worth considering. Here are six.

1. A Bernie Sanders Elizabeth Warren ticket would take the nomination, and take it early, allowing the pair of them to focus on defeating Trump-Pence.

Obviously one cannot simply do the math or predict how every potential voter would react to the combining of two campaigns, but this gives us a rough idea. The momentum and excitement and instant front-runner status might actually result in a larger lead than these numbers suggest.

2. Bernie Sanders is leading Elizabeth Warren in the polls.

3. Bernie Sanders is older than Elizabeth Warren. A successful run by these two could mean eight years for Warren as Vice President plus eight years as President.

4. Bernie Sanders has a stronger platform than Elizabeth Warren, including on foreign policy, budget choices, Green New Deal, free college, and Medicare for All.

5. Elizabeth Warren is the strongest running mate Sanders is likely to find. Her platform has more overlap with his than does that of any other presidential candidate. This is true completely regardless of Warren's sex, race, age, ethnicity, home state, or anything else, but in an age in which tokenism has been elevated to complete respectability, the electoral importance of nominating a woman is significant.

6. Joe Biden is an amazing disaster as a candidate and as an elected official.

David Swanson is the author of "When the World Outlawed War," "War Is A Lie" and "Daybreak: Undoing the Imperial Presidency and Forming a More Perfect Union." He blogs at http://davidswanson.org and http://warisacrime.org and works for the online (more...)
Related Topic(s): Elizabeth Warren, Add Tags
Add to My Group(s)
Go To Commenting
The views expressed herein are the sole responsibility of the author and do not necessarily reflect those of this website or its editors.