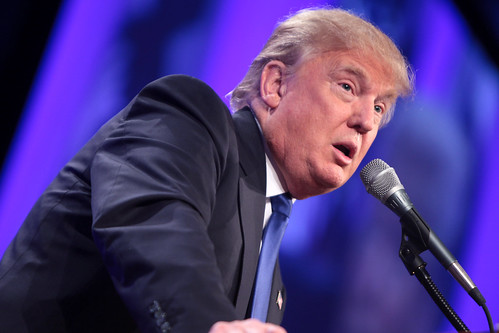 I keep trying to get my head around the much-bruited notion that Trump and the Establishment (or the Deep State) are at war with one another. While lurid headlines might give that impression, in actual fact, Trump has appointed the most "Establishment" cabinet imaginable, pandering to every aspect of our elites' agendas.

He's put an oil man in the State Department. He's put rabidly pro-war figures in charge of the Pentagon and national security. He's given control the economy and most domestic policy to that avatar of the Establishment, Goldman Sachs (at current count, six GS executives or alumni hold top spots in his inner circle). He's given control of the Energy Department to one of the energy corporations' most faithful courtesans. He's given control of the intelligence agencies to people who have long advocated draconian expansions of the agencies' powers. He's promised the techno-lords of Apple and Facebook and Google (and others) that they will reap billions upon billions of dollars in a "tax holiday" that will let them bring home the loot they've stashed in overseas tax havens.

He's promised to vastly expand military spending, pleasing the all-powerful war profiteering lobby. He's promised to lift environmental restrictions on industry, pleasing the Koch Brothers to no end. Even the mainstream media -- much of which is ostensibly opposed to Trump -- knows it will go on reaping bumper profits from his fulminations, as they have done since the beginning of his campaign. The list goes on and on.

I would like to see demonstrated in what way Trump is at war with -- or poses the slightest threat to -- the Establishment, the Deep State, the ruling class, or whatever you want to call the power structures on the commanding heights of American society. No doubt there are factions within the seething morass of the military-industrial-intelligence complex with various motives for undermining Trump; this is the case with every presidency now. (Recall how the Pentagon rolled Obama into a large "surge" in Afghanistan by pushing their agenda in public beforehand, forcing him to either go along or look "weak" in the first days of his presidency.)

Some factions might be protecting their turf against the newcomers that any new president inevitably brings in; some factions might be trying to bring Trump to heel in case he might oppose or curtail their activities; some factions just might not like the cut of his jib; there are, as always, myriad reasons for factional infighting and rodent-rogering and sinister gamesmanship among the vast intelligence "community."

But the idea that Trump, of all people -- and his appointees, of all people -- are going to somehow attack or damage or seek to undermine in any way the Establishment seems fairly ludicrous to me, given the actual appointments he has made and the actual policies he has consistently proposed. But as long as we all keep chasing every burp of his twitter feed or spit-spewing bluster of his public statements -- while treating every nocturnal emission of the intelligence factions as gospel truth -- we'll stay lost in the fog of this phony war ... even as our elites (Trump very much included) continue to devour the world and take us further into darkness, division, ruin and strife.

Related Topic(s): Trump Cabinet; Trump Presidency, Add Tags
Add to My Group(s)
Go To Commenting
The views expressed herein are the sole responsibility of the author and do not necessarily reflect those of this website or its editors.