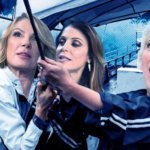 For a number of years now I've been confounded by watching many of the straight, white upper-middle class women in the United States appearing to slide backwards in time into much more traditional roles. Why do so many women still do the heavy lifting of childcare, grocery shopping, housekeeping and cooking? Why do so many of them put the needs of their male partners and bosses first and their own needs last? Why have so many of them wholeheartedly embraced sports when I doubt that most of them were not sports fanatics before they were in relationships with men who are? These were the roles we struggled to break out of in the 60's and 70's. Yet in the seven cases I will present I will describe six women who consider themselves feminists. How can we explain this?

What does it mean to be a feminist in the United States today? Historically we have had liberal feminists and radical socialist feminists, but what do we make of the Pink Pussycats? Granted, they are not radical feminists, but are they liberal? The term "liberal" has become a moth-eaten word used by both sympathizers and demonizers. For now, we will put the word aside. First I will describe experientially what second-wave feminism attempted to do. Then I will describe the lives of seven women I know, six of whom claim to be feminists and certainly see themselves as Pink Pussycats. Finally, I will address the relationship between the Pink Pussycats and liberalism. My claim is that the Pink Pussycats are not liberal in the sense of second-wave feminism and the New-Deal liberalism of Roosevelt. Rather, they are instead "neo-liberal" feminists, who follow the neoliberal trend of the mid 1980's, started by the Democratic Leadership Council. The reference to the sinking ship refers to the decline in the standard of living under capitalism, in which they are mightily trying to keep their heads above water.

Women in the four ages

In the first age, during the 1950's, women were classically traditional. These roles included being the perfect wife and mother, always putting their own needs last and usually deferring to their husbands. They dressed in relatively conservative, soft styles and colors and many of them didn't work outside the home because, though the times were conservative, the economy for the middle class was good. Think of the mothers in Leave it to Beaver, Ozzie and Harrietand Father Knows Best (the name of the show says it all). They even dressed like that when they were cleaning the oven! They'd have the messes cleaned up before we, as children, made them.

Betty Friedan, Gloria Steinem, and Germaine Greer led second-wave feminism among others. They led the charge to challenge the long-accepted picture of a woman's role.

During the second age, as our "consciousness" was becoming raised, we began to reject our traditional roles. Many of us started working for the first time. Because the pay for middle class women was higher at that time, some of us could afford to divorce our husbands and work in traditional male jobs such as middle managers. We started wearing more practical clothing, ditching the spike heels that hampered our walking - let alone running away from predators - letting our skin breathe without all the makeup and our hair turn naturally grey.

At the same time other women, less politically aware, embraced being seen as sexual objects, rather than as sexless as in the fifties. We started wearing provocative clothes, lots of makeup, ridiculous high-heeled shoes and laughed off or rationalized the catcalls on the street as well as sexual harassment from our bosses and male co-workers. I know all of this because I was one of those women.

In the third age, for roughly thirty years, from the early 1980s through 2008, the conservatives held power as the economy continued to contract. In reaction to this, the Democratic Party started sliding further to the right to keep up with the times, and those women who continued to see themselves as liberal slid right along with the Democratic Party. (For the Democratic party slide rightward, see Adam Curtis's disturbing documentary Century of the Self Part IV)

In the fourth age, after 2008, and the election of Barack Obama, many upper-middle-class and middle-class women saw the election of a well-educated black man as a victory for them, too. The glorification of Obama and, to a lesser extent, Hillary Clinton produced the seeds of the Pink Pussycat phenomenon. These women had to work harder than the women of the 50's, 60's or 70's because the economy is now worse. Most middle-class and upper-middle class women can no longer afford to stay at home and take care of the children. They must work to supplement their husband's earnings or, as single mothers, they are the family's sole support. Most of them also do the bulk of the childcare and housekeeping. Because no feminist movement has been able to convince men to fully take on the responsibilities of raising children, these responsibilities fell to the women as their "second shift". Perhaps as compensation for a surprisingly difficult life, women used their appearance to regain some of their lost power. Being sexy and the promise of attention was a bargaining chip.

My experience of second-wave feminism

I got married when I was 19 years old to a conservative Irish Catholic Naval officer. By the late 1960's we had become friends with a group of officers and their wives, all of whom were vocal in their opposition to the Vietnam War and U.S. foreign policy in general. These conversations woke me up politically and I started moving further to the left. In the early 1970's I attended community college where I met Mary, who became one of my longest standing friends. Mary was a strong feminist, and along with two gay men I became friends with, got me to take feminism and gay rights more seriously. I also joined the anti-war groups while at San Francisco State and started facing the growing differences I had with my husband. My marriage did not survive these changes. I did what many women did: dragged their husbands into therapy kicking and screaming, only to be told I was the one who had the problem.

At the same time, we liberal women were being exposed to books like Our Bodies, Ourselves. This book detailed for us information about our own health and sexuality that formerly had been secret, considered too crass to talk about publicly. Consciousness-raising groups sprang up everywhere, which aimed to help us understand the patriarchal system and how it oppresses all women. We were being taught that it wasn't our job to please and cater to the men in our lives. We felt stronger together as we began making demands for equal pay, greater opportunities in the workplace, better support systems for single mothers and the right to be seen as equals to men, rather than as objects for them.

Related Topic(s): Democratic; Feminism; Feminist; Liberalism; Neo-liberal, Add Tags
Add to My Group(s)
Go To Commenting
The views expressed herein are the sole responsibility of the author and do not necessarily reflect those of this website or its editors.

My Love Affair with Rhythm and Blues: From Solomon Burke to Sam and Dave to Laura Lee