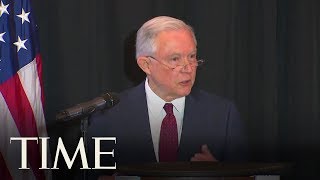 Where else in the world, besides America, would we see a frightened, screaming child wrenched away from the arms of his, her parent then taken away and placed in some detention facility while the parent is hauled off as an illegal alien? I'd guess nowhere else. It is simply unconscionable.

Yet for the Trump crowd such officially sanctioned behavior is just applying the law.

One would think an adult or even a teenager could readily understand ripping a frightened, screaming child from their parent by Trump's immigration officials is contemptible. Not so to the Trump mob. Over the weekend there was Trump's Attorney General Jeff Sessions saying of the practice, " I would cite you to the Apostle Paul and his clear and wise command in Romans 13, to obey the laws of the government because God has ordained them for the purpose of order. Orderly and lawful processes are good on themselves and protect the weak and lawful". But it wasn't just Sessions.

White House Press Secretary Sarah Huckabee Sanders got into the act mouthing something similar with, "It is very biblical to enforce the law." To which I'd like to add what about human compassion enforcing the law at least recognizing keeping families together is necessary and it's the compassionate thing to do. Slavery and separating families was supposed to have ended over 150 years ago. Is Trump and his minions trying to reestablish a new form of this horror?

Of course Repubs and Dems across the board are appalled at the administrations cruelty.

Maybe some wacko Trump supporters will still support the "legality" of these immigration policies being hard hearted as they seemingly are incapable of showing any empathy toward these separated families i.e. putting themselves in the shoes of these children and theirfamilies being separated.

Trump and his administration has no pattern to what it does. In one instance it will begin to forge an agreement with Kim Jong-Un's North Korea to begin the process to denuclearize the Korean Peninsula by Trump ending the war games with South Korea and Japan off the Korean Peninsula admitting they're provocative. But this after he reneges a month earlier on the P5&1 nuclear agreement with Iran which has infuriated his western allies who want to keep it.

With the current administration It's as if sanity emerges from time to time then callous disregard and stupidity enters the picture and one can't believe what they're seeing.

The "Dubya" Bush crowd resorted to torture as we saw in the videos of US military personnel using it on Iraqi detainees at Abu Ghraib prison in 2004. Those videos drew revulsion from many most? people in the US. But even the Bush mob knew their resorting to torture was a self inflicted wound they had to reconcile with the American people. So they prosecuted a few low level military personnel and the US officer in charge of the detention center as the "few rotten apples" that had to held accountable even though they wouldn't come clean admitting they authorized the torture.

As bad as the corporate MSM usually is in this country mostly as a complicit enabler to official Washington's policies and actions their showing border police ripping frightened, screaming children from the arms of their parents just won't be explained away by Trump administration flaks spouting some biblical righteousness. No, Trump and his minions don't seem to recognize the revulsion its caused in the American people to their policy of separating families. They may be committing political suicide and it's self inflicted but so what. Cite some bible verse and that's all that's necessary. Hello.

If the MSM showed pictures of our drone attacks killing and maiming innocents in our war zones as it once showed pictures of innocent Vietnamese people being set aflame by napalm bombs being dropped by American planes during the Vietnam war-which contributed to the rise of massive demonstrations against the war on campuses across the country- then maybe the American people would show as much revulsion to our endless wars as it's doing now with Trump's separation of children and their families at the border with Mexico.

Retired. The author of "DECEIT AND EXCESS IN AMERICA, HOW THE MONEYED INTERESTS HAVE STOLEN AMERICA AND HOW WE CAN GET IT BACK", Authorhouse, 2009
Related Topic(s): America; Children; Detention; Families; Immigration; Policies, Add Tags
Add to My Group(s)
Go To Commenting
The views expressed herein are the sole responsibility of the author and do not necessarily reflect those of this website or its editors.