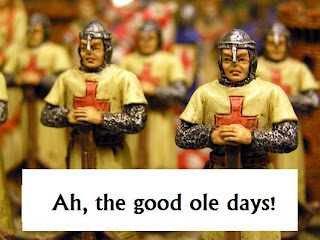 Both Progressive and Regressive Christians (aka Religious Right or Christofascists) are still reeling with the news about "Hutaree", its zeal, its militarism, its expanse and the fact that it views itself as 'Christian'.

"Many mainstream media outlets, like ABC and CNN, are irresponsibly reporting that those arrested in Michigan in the alleged plot to murder law enforcement officers are 'Christians,'" said Dr. Gary Cass of the Christian Anti-Defamation Commission. "Even if they identify themselves as Christians, what they were allegedly planning is absolutely contrary to Christianity. They may have illicitly co-opted the Christian faith to justify their murderous intentions, but it is defamatory for the media to keep referring to them as Christians. They are simply terrorists."

So, were the knights of the Crusades 'simply terrorists'? Is Repent Amarillo really a terrorist group? What about Rev. Rod Parsley? Where is the dividing line?

Dr. Cass is, of course, grasping at straws in attempting to distance himself and others of his Religious Right flock: it's rather counter-intuitive (much less, hypocritical) to say that anyone who identifies themselves as Christians are not Christians. Christians around the country have been saying that everyone should have the right to call themselves Christians. Also, a strange parallel of intolerance shows itself in the Christian view of the organization known as NAMBLA - National American Man-Boy Love Association. Christofascists point to it as an accepted and almost typical gay rights association - which it is not. They also extend its premise to all gays. What Cass is avoiding is this: militarism and potential violence exist in today's American Christian landscape. Hutaree is an extreme (but real) version of Rod Parsley's vision of Christian soldiers. It's tone and rhetoric are equivalent to Repent Amarillo. It's hatred of non-Christians (Jews, "pagans," Muslims) is just as bad as Fred Phelp's hatred of gays or Father Charles Coughlin's anti-Semitism seventy years ago.

The dividing line, America seems to think, is between words and action. Christian pastors can spout all the military rhetoric they want. They are protected twofold: freedom of speech and separation of church and state. They have nothing to do with the actions taken by fringe groups.

This is obvious, inane self-deception. Actions are almost always the result of words, especially when they take effect in the brains of an illiterate: the Elmer Gantrys egging on the Elmer Fudds.

Rev. Dan Vojir is has been writing/blogging on religion and politics for the better part of ten years. A former radio talk show host (Strictly Books " Talk America Radio Network) and book publisher, Dan has connected with some of the most (more...)
Related Topic(s): Christofascists; Hutaree; Militarism; Repent Amarillo; Rod Parsley, Add Tags
Add to My Group(s)
Go To Commenting
The views expressed herein are the sole responsibility of the author and do not necessarily reflect those of this website or its editors.