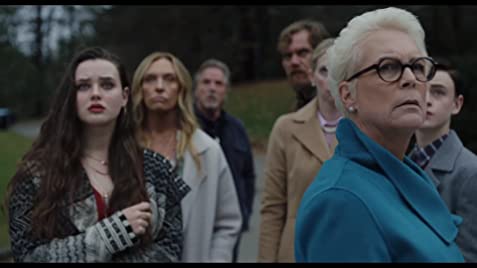 There are lots of reasons to watch a film. To be entertained. To be distracted. To be inspired. To find enchantment. To learn something new. But there is only one reason to study a film and that involves a close reading of its politics: how power is defined --- socially, culturally, economically --- and whether it reinforces the status quo, or subverts it. Zero Dark Thirty (Bigelow 2012), American Sniper (Eastwood 2014), Deadpool (Miller 2016), Black Panther (Coogler 2018) and Vice (McKay 2018) are examples of films that, in one way or another, celebrate the toxic myth of US Exceptionalism. America isn't a country ripped apart by widespread inequality, rampant violence, systemic racism, corrupt leadership and disastrous military adventures abroad. It's a shining city on a hill spreading freedom and democracy to the unenlightened at home and abroad. Maya isn't a sadistic war criminal; she's a courageous government official. Chris Kyle isn't a cowardly assassin; he's a decorated military hero. Wade Wilson isn't a murderous vigilante; he's a stand-up comic with a killer routine. T'Challa isn't an Obama clone pushing predatory capitalism; he's a full-fledged cultural warrior. And Dick Cheney isn't a genocidal thug; he's the statesman who kept America safe.

Thankfully, the films submitted below do the exact opposite, politically speaking, in this case following storylines that expose the darker, more realistic side of the "traditional family": the role of class and race, the gendering of authority, the lines of succession and the members involved, their relations, their flaws and their intrigues. Both fictional families dally in the rarified atmosphere of the fabulously wealthy, but both face the threat of losing everything, either by supernatural force or through a change in inheritance. "Family" - from the Latin "famulus / famuli," meaning "slave, property, servant." Let the silliness begin.

A well-worn premise leads to an entertaining subversion: a young woman who has no family, symbolized by her lack of a surname, is marrying into a very wealthy family with a very big surname, Le Domas (Span. "the controllers"). There's just one hitch. The family intends to sacrifice the young woman in order to fulfill a Faustian bargain their great grand-daddy made with a demonic spirit called "Mr. Bail." [Full disclosure: there is no such thing as demonic spirits; there are only demonic people.] They get extreme wealth. He gets a soul. What could go wrong?

Well, frankly, everything. But that's part of the fun.

Grace meets the new in-laws on her wedding day and, true to form, they either ignore her or look down their noses. She has nothing and they sit atop an empire. Gracious to a fault, she takes their stuffiness in stride until she is forced to play "Hide and Seek," a slightly updated version of rich-people-kill-orphan-bride. Even her dotting, duplicitous hubby, Alex, wants her dead. It's a tradition. Grace, however, is wily and strong-willed and manages to stay alive, which is bad news for the family. In failing to kill the bride they fail to satisfy the contract with Mr. Bail, the penalty for which, as they know perfectly well, is bodily explosion. Literally.

Poor Grace. Like most women she's been taught to believe marriage will ferry her into the arms of a secure and stable family. It will give her life meaning and purpose. It will catapult her into a different class altogether, a monied class, full of love and servants and big mansions. In fact she's being pawned in a game whose sole purpose is to ensure the family's continued financial "dominion." Marriage isn't an equalizer. It's a death sentence, a patriocentric conveyor belt used to shuttle women from childhood to negotiable object. On the one hand, material resources become commodities in an economic exchange controlled by men (Grace and her coverture); on the other, supernatural forces interfere with the natural order for the benefit of men (Victor's fortune, passed to Tony, then Alex). Both are familiar instruments of patriarchy, pyramid schemes designed with the express purpose of excluding women from power altogether.

Except, in this case, the bride survives and the family goes boom. It's an hilarious conclusion to a wickedly rebellious un-fairytale. Body parts flying! Blood splashed everywhere! Mr Bail nodding in approval! "I want a divorce," Grace tells Alex right before he explodes. She's covered in gore and giggling hysterically. Le Domas indeed.

Speaking of wealthy families and the structuring of authority, how about those Thrombeys? At first glance they appear to suffer the normal kinds of pathologies that infect close relations. They lie, cheat and steal from each other and from themselves. They embellish. They defraud. They can't be in the same room for very long without fighting. Yet here they are, the lot of them, gathered at the reading of Harlan Thrombey's will, curled around his money like snakes around Laocoön. Their relationships are built entirely on superficialities. "Eat sh*t!" Ransom sneers. There isn't an ounce of integrity among them.

Crime novelist Harlan Thrombey rules his empire with a disciplined but tolerant hand, and his empire rules his family. He loans Linda the money to start her business, arguably a majority interest. He lets Walt pretend he runs the publishing company, when in fact he's merely nominal. (In a deleted scene we learn Walt is embezzling from the company.) He finances Joni's daughter's private education, until he discovers she's been double-dipping to support her own lavish lifestyle. He's also been supporting Ransom, despite his grandson's indolence and the animus between them. Ironically, Ransom is called the "black sheep" of the family.

But it's the Thrombeys' treatment of Marta Cabrera, Harlan's Latina caretaker / nurse, that drives much of the film's (racial) drama, and its (racist) humor. Before the reading of the will, they carry on as if they actually care. Meg presents herself as a confidant and seems honestly concerned with Marta's well-being. Joni promises to support her after Harlan's sudden death. Walt & Linda imply the same, telling her they consider her "part of the family." But their allegiance is paper thin. The reality is the Thrombeys treat Marta like white people typically treat POC who work for them: as necessary appendages, the quiet, demur, harmless "best friend" who disappears into the background on command.

Related Topic(s): Family; Film Reviews; Immigration; Murder; Women, Add Tags
Add to My Group(s)
Go To Commenting
The views expressed herein are the sole responsibility of the author and do not necessarily reflect those of this website or its editors.