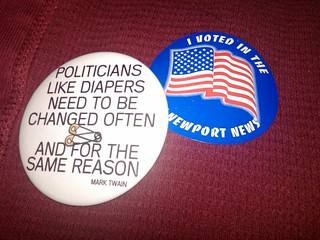 Like millions of Americans in the middle of February I have the flu.

Unlike millions of Americans I have a deadline.

Forced to stay at home, sucking Vitamin C drops, I have read newspapers, listened to radio, and watched television as a source of diversion.

Dominating the media is the campaign for the presidency.

In Iowa, all of the candidates went to fairs, restaurants, and anywhere there was any sign of carbon-based organic life to grab votes. Because hogs and corn stalks haven't yet been granted the right to vote, the candidates resorted to talking with humans, and making sure that everyone got more useless swag than the presenters at the TV awards shows. The newspaper reporters were doing their best to report interactions between candidates and humans; the TV reporters were reporting on the polls. Very few were asking the tough questions.

When the votes in the caucuses were finally decided, Hillary Rodham Clinton barely edged Bernie Sanders on the Democratic ticket. However, it was a victory for Sanders who was getting single digit acceptance a few months ago; for Clinton, it was a hit in the head that she needed to revitalize her campaign.

For the Republicans, Donald Trump, as expected, continued spewing insults at his rivals, shouting about immigrants and building something along the U.S.--Mexican border that would make the Great Wall of China look like a picket fence. Sugar-coating his own rhetoric, he somehow convinced Iowans that America was no longer great, but in his hands, which were holding up his ego, he would make America great again. One of his solutions was he "would bomb the sh*t" out of them. He never explained how he was going to do that with a nation and military that he thought wasn't so great. Nevertheless, Iowa Republicans swooned over his carnival squeals and delivered him a blue ribbon victory.

Minutes after the election results were announced, the candidates, trailed by a horde of byline hungry reporters, began their rapid descent upon New Hampshire, where they shampooed, rinsed, and repeated their assault upon anything with a heartbeat. The Republicans increased their attacks on President Obama, renewed attacks on Hillary Clinton's e-mails, and erroneously called Bernie Sanders a Communist. Underlying their vitriol for Democrats was a pile of vitriol of each other, invoking the legacy of Ronald Reagan while grossly violating his 11th commandment that Republicans should not be attacking each other. For Clinton and Sanders, their own debate was more like a sharp discussion of issues rather than personal attacks. When the votes came in, Trump again got the plurality, but Ohio Gov. John Kasich surprised the media and the poll analysts by coming in second. Two candidates dropped out of the race; the rest scrambled their positions and staff trying to figure out why they no longer were second or third, and what to do to body-slam Trump who was scoring points by pretending to be an extreme conservative by launching an even greater fusillade of insults at what he believed were a bunch of wannabe losers.

By the time the candidates and reporter menagerie made it to South Carolina, Sarah Palin and Donald Trump were basking in a love fest while Nikki Haley, governor of the third state in the primary shuffle declared her support for Marco Rubio and not Jeb Bush. To account for that insult, the former Florida governor brought in the heavy artillery--his father, the 41st president and his brother, the 43rd president, a reminder to the voters that the Bush genetic markers called for another Bush to surround the White House.

Somewhere during the campaign, the candidates stopped long enough to pretend they were in a legitimate debate. For the Republicans, it was a case of Trump vs. The Other Guys, all of whom seemed to be trying to get media attention.Sometime between the New Hampshire and South Carolina primaries, Supreme Court associate justice Antonin Scalia died. Within minutes, Senate majority leader Mitch McConnell declared he would block any nomination that President Obama presented for confirmation. The other Republican leaders and presidential candidates picked up the message and ran with it, declaring that a president in the his final year should not nominate a Supreme Court justice, fearful that any nominee would be a liberal whose presence on the Court would turn it from a 5--4 conservative majority to a 5--4 liberal majority. Barack Obama, backed by most elected Democrats, said he was still the president and would fulfill his constitutional responsibility to make nominations.

By the time the gaggle of reporters and what's left of the candidates limp into Super Tuesday, March 1, the public will be burdened by the last of the presidential swag and hoping that everyone--candidates, on-air reporters, and bloviators--get laryngitis.

As for me, hopefully my flu will be over and I'll be able to find amusement in something other than a flush caused by high volume egotistical hyperbole laced with half-truths and statements, all of which are enough to inflate my blood pressure.

[Dr. Brasch is an award-winning columnist and author of 21 books; his latest book, published this week, is Fracking America: Sacrificing Health and the Environment for Short-Term Economic Benefit.]